By Alexandra Arkley, Chris McMahan on April 10, 2015 in Sports, Tennis 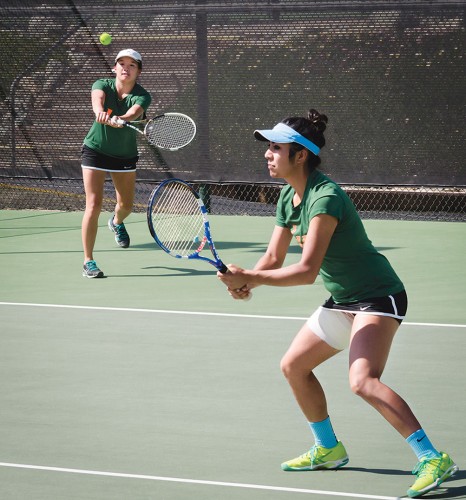 La Verne sophomore Janae Chinn returned the ball to continue a short rally near the end of the last set in their doubles match. Chinn and teammate junior Andrea Madrigal skinned the Beavers, 7-2, Friday at the Claremont Club. / photo by Alexandra Arkley

The Leopards bounced back from a tough 8-1 loss last week at the hands of the Claremont-Mudd-Scripps Athenas.

“We played a good match. It was great to have almost everyone playing today,” head coach Yolanda Duron said.

The Leopards swept through their doubles matches with ease to take a 3-0 lead.

They faced Caltech freshman Rachel Morton and sophomore Katie Antilla and swept them, 8-0.

La Verne continued its dominance in singles, winning four of the six matches.

“It took me a while to get acclimated. I had to get comfortable with my shots,” Chinn said.

Trujillo joined in on the fun, beating Wang with scores of 6-2 and 6-1.

The final singles win for the Leopards came courtesy of sophomore Areli Martinez, who defeated Antilla in two sets, 6-1 and 6-0.

Duron said she was particularly impressed with Martinez’s performance.

“Areli was very impressive because she hasn’t been feeling well and came out with a great attitude and won for her team,” Duron said.

One of the two losses for La Verne was when Torres lost to sophomore Sophia Chen.

The other loss came when junior Morgan Cohen lost to Morton with scores of 6-4 and 6-1.

Caltech, unlike La Verne, is not nationally ranked but Matsuda said that they played well and very defensively, so the Leopards had to step their game up.

Even with the dominant win, Duron said there is still a lot more things to improve on as the season goes on.

“We just need to keep improving our singles game strategies and work on our emotional toughness,” Duron said.

The Leopards carried the confidence they were feeling against Caltech into a match against No. 18 ranked Redlands Saturday at Verdieck Courts.

The team extended its win streak to two, defeating the Bulldogs, 6-3.

The Leopards swept their doubles matches and took an early 3-0 lead advantage.

Redlands came back and took three of the singles matches to even the score at 3-3.

Matsuda and Etchegaray both came back from a one-set deficits, coming out victorious 7-6 and 10-1.

The Leopards improved to 10-4 on the season and have a 4-1 Southern California Inter­collegiate Athletic Conference record, good for third place in the conference.

The Leopards hope to extend their win streak to three as they face the Chapman Panthers at 2 p.m. Friday at the Anaheim Hills Racquet Club.