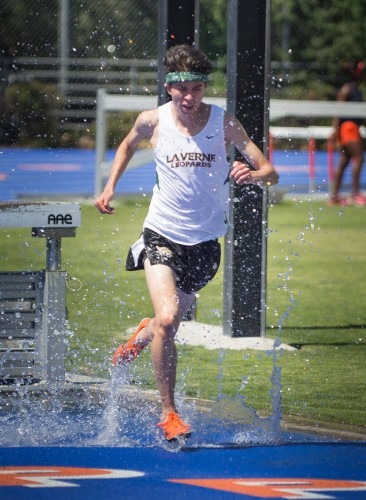 La Verne sophomore distance runner Damon Gomez dashes through the water barrier toward the end of the 3,000 meter steeplechase Saturday at Strehle Track in Claremont. Gomez placed ninth with a time of 11:36 at the second SCIAC Multi-Dual. / photo by Jerri White

The men’s relay team finished first in the 4×100 meter, setting a season record of 41.69 seconds.

Men’s relay then finished second in the 4×400 meter with a time of 3:20.45, just 0.1 seconds behind first-place Claremont-Mudd-Scripps.

“I know everybody in the conference pretty well, so I saw the competition and knew what I had to do,” Hayes said.

La Verne’s top finishes did not just stop there, but continued with the 400-meter dash.

Freshman Josh Francis and senior Khayree Jones, who had scores of 49.90 and 49.97, respectively, took the top two spots.

The final first place finish for the La Verne’s men’s running team came courtesy of junior Nick Gonsalves, who finished with a time of 10.95 seconds in the 100-meter dash.

The women’s team may not have finished first in any running events, but it had top-five finishes in 14 events.

“I had a good performance, but it could have been better in multiple aspects,” sophomore Alexa Smith said.

She also placed fourth in the women’s 400-meter dash with a team of 59.67, right behind sophomore Kimmy Kabluyen, who finished third with a time of 59.14.

“I’m usually really irritated with my performances because I expect a lot from myself, but I was happy about today,” freshman Danica Langaynor.

In the field events, junior Angelyn Caldwell finished first in the high jump with a jump of 1.50 meters in the finals.

“Some of (our jumpers) had good jumps, but they need to be more consistent,” Widolff said.

Sophomore Taylor Schulze finished first in the pole vault with a vault of 3.43 meters in the finals.

For the men’s field events, sophomore Jason Nicholls finished first in the pole vault with a vault of 4.80 meters.

Sophomore Chris Gura also finished first in the discus with a throw of 43.44 meters.

Sophomore Andrew Carrasco dominated the hammer with a throw of 54.25 meters.

With nationals eight weeks away, improvement is something on the teams’ mind.

“We just need to work harder and get our endurance up higher and we’ll be good,” Smith said.

The team will be back in action starting at 10 a.m. Saturday at Strehle Track for the Pomona-Pitzer Invitational.