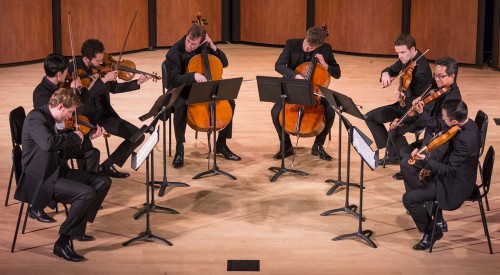 “Music is a form of communication that goes far deeper than words,” said Vijay Gupta, founder and artistic director of Street Symphony. “Music can heal.”

The melodious tones of the violins and cello filled the auditorium with grace.

There were no breaks in between each portion of the piece.

“You can think of each (section) as one day of a week,” said New Orford String Quartet cello player Brian Manker.

“Each one has a particular flavor, a particular color; but when they are all combined and when you hear the entire thing as one, you can view it as a small snapshot of a week.”

The ballad began with quiet and intense melodies from the violins, similar to a horror movie soundtrack.

The piece highlighted the musical conversation between the violins and cello.

One of the sections of the piece utilized guitar picks for a portion of the song, dedicated to Brady.

The rhythm and driving energy of the piece was fascinating due to the peculiar use of guitar picks.

The piece also utilized flanging, an audio effect in which two identical auditory signals are played simultaneously, but one signal is slightly delayed.

The use of flanging in the performance created a mesmerizing sound and pitch that echoed throughout the auditorium. This added to the horror sounding piece.

The piece incorporated both quartets to converse with one another musically. Both quartets blended violin and cello effortlessly, raising the authenticity of classical music to another level.

“There’s a story that apparently (Mendelssohn) was possessed because the music was so brilliant and so bright and beautiful,” Gupta said.

“But I think saying that he was possessed actually doesn’t give him the full acknowledgement of his genius.”

They have performed over 63 times at Los Angeles County jails. New Orford String Quartet is one of Canada’s best-known musical ensembles, performing for over 26 years and more than 2,000 concerts on six continents.

“It was my first time ever going to something like this,” liberal studies senior Danielle Ongpin said. “It was beautiful how well it all came together.”