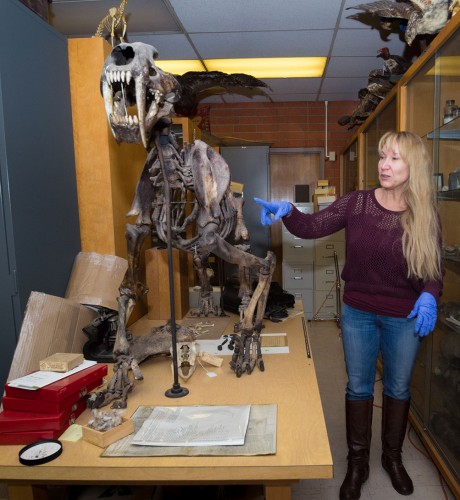 Among the artifacts in the Edmund C. Jaeger Museum is a saber-toothed cat skeleton. J.Z. Gilbert donated the skeleton in the 1940s. Gilbert, who became a part-time teacher at La Verne College, brought the skeleton from the La Brea Tar Pits in Los Angeles. Anne Collier (pictured above), museum curator and La Verne alumna, is helping to prepare the museum relocation. / photo by Jerri White

The nearly 50-year-old Jaeger Museum will have to be transferred out of the Mainiero Building to make room for a micro lab by the end of the summer.

The museum opened in 1967 and has since been considered a hidden treasure in the University.

American biologist Edmund C. Jaeger donated money for the University to open a full museum in the Mainiero Building to house donated artifacts that can be used as teaching tools for students and professors.

There are a variety of specimens in the museum that hold archeological, astronomical and geographical value.

“The museum contains a wealth of items and many of the items are used in teaching,” Jones said.

The natural sciences department received a grant to create a new micro lab but it cannot be developed until the museum is documented and moved.

“There are speculations of locations, truly all over the place,” Interim Dean of the College of Arts and Sciences Felicia Beardsley said. “Some faculty and staff have ideas of specific places, and some just want to make sure it is stored properly.”

There is currently a dispute over where the museum could go. While there are pitches proposing another location in Founders Hall, one of the more popular proposed plans is to relocate it to the Bonita Building where the bookstore was previously located.

Without a new location, the items in the museum would have to be placed in storage.

Turning the Bonita Building into a museum would require a great deal of remodeling in order for it to be a suitable place to house the items. It would also require a staff to curate it.

Professors believe the ends would justify the means, as the community would have a museum and the students and professors would still be able to use it as a resource for their courses. Plus, it would be an academic addition to the institution.

The items need to be cataloged, moved carefully and have proper exhibition conditions such as climate control and square footage, professor of health services management Kent Badger said.

There are also concerns about the long term operational costs for the building, which is why the University hopes to rent it out to a third party instead.

Jones, along with several other faculty members including Badger, Bob Earhart, Elric Boardman, Robert Neher, Harvey Good and Jeffery Burkhart, have written a proposal where the University would use local resources to renovate the building for the museum, to cut down on costs and support local business such as carpenters, designers. The proposal also touches on potentially open a café in the museum when it is done.

The goal is to make the museum open to students and faculty as an educational tool but hopefully include the museum into the community as well, by opening new local businesses in the building.

“Everything we are suggesting is providing mutual support,” Badger said “It’s a perfect location, it’s part university and part city.”

The proposal was pitched to the Faculty Senate Thursday, but the issue had to be tabled until the fall when are more people to discuss it. The museum currently includes Native American baskets, a porch post from Lordsburg College, animal bones from the La Brea tar pits and a variety of other items.

The items were donated to the University and it is the now its responsibility to steward them and keep them displayed properly.

There is not currently a natural history museum in the Master Plan, but the natural sciences department hopes that this relocation of the Jaeger Museum can happen relatively soon as to make way for the micro lab that is needed in Mainiero.

“The museum has never been fully cataloged. We need to know the full spectrum of what is in the collection.” Beardsley said. “We need to make it available to the community at large.”