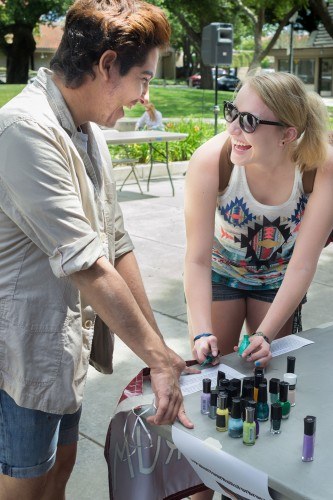 At the Transgender Resource Fair, during transgender awareness day, Sophomores Audie Munoz and Jessie Bias participate in #PaintYourNailsForBruce. The campaign is trending in support of Bruce Jenner identifying as a woman. Thursday’s fair consisted of informational speeches by faculty members. Tri-City’s booth in Sneaky Park gave out pamphlets about “Room 4 Everyone,” a mental wellness campaign. / photo by Jerri White

“It can be a lonely journey if no one wants to inquire about what it means to be transgender,” said Daniel Loera, multicultural affairs director, at one of the University’s first events to support the transgender community May 1.

“When students are done with their academic journeys here, they should have a firm understanding about their identity. It’s a responsibility to the community at large.”

The Transgender Resource Fair in Sneaky Park brought awareness to the transgender community and students own sexual identity on May 1.

Activities, good food and warm weather drew a crowd of about 150 people to learn about resources and express themselves. The event was collaborative effort between the offices of Religious and Spiritual Life, Diversity and Inclusivity, Multicultural Student Services and Counseling and Psychological services.

“Today is about learning about transgender issues and what that means and encouraging the conversation,” Zandra Wagoner, university chaplain, said.

“For us not to talk about (transgender issues) could be devastating to someone on that journey,” Loera said.

An ally is anyone who supports and is active in sustaining the rights of lesbian gay bisexual and transgender people.

Other clubs on campus were present, such as Residents Housing Association, Latino Student Forum and Interfaith Student Union.

“When I reached out to the cultural clubs on campus, they responded positively, but there is not a lot of knowledge about what (being transgender) entails,” Loera said.

RHA provided info on Gender Neutral housing and Safe Zone training for Resident Assistants. Being Safe Zone trained means creating an environment in where LGBT students can feel safe from harassment and can have an ally to turn too if something does happen.

LSF encouraged students paint their nails to support Bruce Jenner and her recent announcement about transitioning to a female. They also provided information about the struggles of transgenders in Latin America such as poverty, religion or political oppression.

The Interfaith Student Union booth provided statistics and facts about the relationship between religion and transgender.

“Religion is sometimes seen as a barrier but all religions still have supportive allies within them,” Wagoner said.

Loera and Wagoner encouraged students and faculty to paint on the graffiti wall. The question “What’s your gender expression?” was written across one of the walls. Participants responded by painting pictures and writing out responses and quotes.

“What are our own parameters of who we are?” Loera said.