By Alexandra Arkley, Kayla Hockman on May 15, 2015 in Community News, News 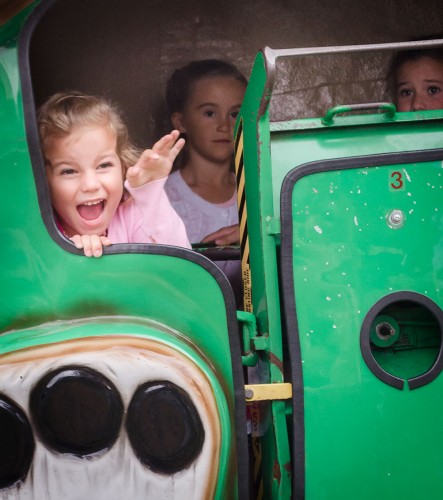 Charolotte Gambino, accompanied by friend Payton Diecidue and her sister Isabella, waves to her family as they whirl around on a traditional spinning carnival ride Saturday. Families enjoyed rides and games Friday, Thursday and Friday at the 68th annual Our Lady of the Assumption Fiesta in Claremont. The fiesta brings more than 15,000 community members together for family fun, while raising money for the church’s ministries and outreach programs. Along with food and rides, the fiesta has live music and is free to the public. / photo by Alexandra Arkley

“There’s something special about the OLA Fiesta compared to other local Catholic churches and schools,” OLA Principal Bernadette Boyle said.

“We have a good thing going here and people like it.”

All of the money raised benefits the church ministries and community outreach.

The event attracted 15,000 people for three days of carnival fun for all ages during Mother’s Day weekend.

“It grows bigger and better every year,” Boyle said.

“The OLA Fiesta has become one of the biggest events in Claremont.”

The event featured four bands throughout the weekend. The Ravelers, a classic rock band for all ages, took the stage Friday night.

The Falconers: OLA’s Own and The ACE Band performed on Saturday.

The festival concluded with The Way Back Machine and Sgt. Peppers Beatles Tribute Band.

“The bands are always my favorite portion of the event,” Pomona resident Gina Gonzalez said. “It gets everyone dancing and is fun for the whole family.”

“We’ve been participants for about 16 years, and this is our fifth year volunteering,” volunteer and Claremont resident Monica Lee said.

“I love that I get to have my family with me for Mother’s Day weekend instead of just Mother’s Day.”

OLA Fiesta incorporates numerous volunteers and donors to make the weekend free for the public.

Admission into the fiesta is free, but tickets are available for purchase for rides, food, shirts and games.

The event has over 50 sponsors, donating everything from cars to gift certificates.

With the large crowd and community effort, planning for the event begins early.

“As soon as this is done, they will be having a meeting in June to plan for next year,” Boyle said.

“People put that much time and energy to make sure this event works for the community and is as good as it is every year. That’s how important this (event) is.”

The first OLA Fiesta was in 1947 to raise money to build the church. The event encompassed food, music, dancing, games and carnival rides. The tradition continues yearly, growing bigger and better for the local community.