Alejandra Aguilar
Special to the Times

I stepped into a cosmetic surgery clinic at the age of 21.

For four years, I had been saving money from my part time job. People asked me what I was saving for but I did not know.

While I worked on my body image senior project, I asked myself, “What if I invest in my body image?” I felt like a cheater. I was advocating for all body sizes, but I was thinking about paying thousands of dollars to turn myself into the girl I had always wanted to be.

At 21, I sat in a bright waiting room with women of all ages sitting in front of me, beside me and behind me – most were in their 20s and 30s. Like these women, I was healthy; I had never been sick or in a hospital despite my weight. No one with illnesses was allowed to have a procedure. This was purely for cosmetic purposes.

That morning before my appointment, I decided to really scrub my body. I decided to wear matching undergarments; although I knew I would have to take them off. I decided to look the best I possibly could. I was going to be judged by a creator of perfection – that is what everyone told me. I knew my body was not perfect, but I wanted to try. I thought the comments about my body would sting less.

As I sat, everyone looked like they had a knot in their throats – like me. No one spoke or made eye contact, but things changed when the nurse called a group of six of us in.

The cosmetic surgeon came in with a presentation on his iPad to explain to us what “mommy makeovers” were – that’s what we were all having “done.”

“I’m going to tell you all at once what you’re probably going to ask me instead of telling you one by one,” he said.

A mommy makeover is cosmetic surgery from head to toe. He began with a page with four different body shapes. He said that was the most important part. We were all either apple, pear, hourglass or rectangle shaped. He spoke like a motivational speaker who was also a passionate artist.

The women’s eyes got big and smiles grew on their faces as he began showing us before and after images of breast lifts and augmentations. We all had something in common; we all had extra fat. However, some had low breasts, extra skin and small bottoms. My eyes felt like they were in a trance and his voice was a soothing background melody.

What did I want? Did I want this?

He moved on to the tummy tuck. He showed us pictures of women with excess skin and fat that drooped, but their “after” picture looked amazing. They looked like entirely different women; their skin was tight and smooth. One of the women in the group blurted out, “That’s exactly what I want.”

He moved on to liposuction, which was the least drastic. Images of women with rolls on their belly, back and arms were sculpted into perfection. I felt a rush – like the one I get when I really want to buy something at the mall that I cannot afford.

He left us to talk until he called us in one by one. We all began talking about how much we wanted it, how great it was and how happy we would be once we had new bodies. One by one, the women disappeared until I was the last one left.

I sat by myself in a quiet, cold waiting room. The girl before me came out and said, “Wow. I did not know I had so many problems.” I gave her a half-grin.

The nurse led me to an examination room, where I removed everything except my underwear. I put on a paper robe and sat in a chair. I felt ashamed. I felt ashamed of my body, to be there and to be considering it.

I heard a knock on the door, and the tall, poised cosmetic surgeon and a nurse walked through. He introduced himself, asked me basic questions about my health and about potential procedures. Then, he asked me to remove my paper gown.

I did and a rush of embarrassment ran through my body. His expression remained the same, as if he had done this a million times, which he had. Then he examined me from head to toe. He pulled out a measuring tape and placed it on my chest to each of my breasts. My breasts were too small for my hourglass shaped body but fixable with saline implants.

He pointed to fat on my belly, arms, inner thighs, back and said he could take it all out and transfer it to my buttocks. I did not think that was an area I had to worry about, but he said he could make it better.

My bottom never bothered me. He also said he could remove my armpit fat. Who worries about that?

I dressed and headed to the waiting room, where I would be given a quote.

Soon, she had a pen in her hand and my eyes wandered over a line that read, “Patient’s Signature.” She said I did not have to decide now, so she gave me the copy. I stood up and walked out wondering why I had even been tempted to say yes.

Alejandra Aguilar can be reached at alejandra.aguilar@laverne.edu. 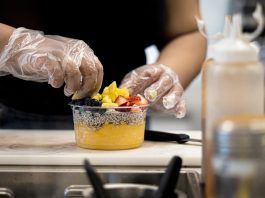 Most students still masking up