By Celine Dehban, Kellie Galentine on May 8, 2015 in Health & Fitness, LV Life 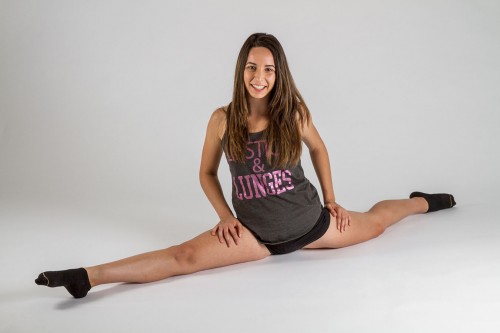 Corenne Hall’s anorexia nervosa dominated her life between ages 13 and 16. As a dancer, Hall had a constant drive for thinness. She now focuses on fitness and keeps her body healthy through exercise and proper nutrition habits. / photo by Celine Dehban

Five years ago, Corenne Hall sat during her lunch break as a freshman at Charter Oak High School in Covina. As the students at surrounding tables ate their lunch, Hall’s friends were trying to shove a carrot down her throat.

“My friends that knew about (my eating disorder) thought it was a complete joke,” Hall, now a sophomore psychology major at the University of La Verne, said. “They actually choked me at lunch one day because they thought it was a joke and thought it was completely voluntary of me to be the way I am.”

Hall, 19, was diagnosed with anorexia nervosa at age 13 after fainting during her middle school physical education class.

“My mom had to come pick me up and (the guidance counselor) told her, ‘We think your daughter is anorexic,’ and my mom started crying and got really pissed off at me,” Hall said. “To me, that was really scary to see, and I wasn’t really sure about what was going on because I wasn’t really informed about what being anorexic meant.”

As a dancer, a slim figure was always at the forefront of Hall’s mind. As her anorexia progressed, she would Google ways to feel full. Drinking water, wearing tight belts and cutting her food into tiny pieces were among the ways she found to actively consume less.

Online communities of people with eating disorders often form on “pro ana” or “pro mia” sites. These sites promote eating disorder behaviors, including how to feel full and encourage one another to keep moving forward. Pictures of girls in the forum myproana.com show extremely thin figures with words like “pretty girls don’t eat.”

“Those pro ana sites are a breeding ground for girls who are unsure. They might be on the cusp of an eating disorder and that just throws them over the edge because they feel secure in a community like that,” said Chelsie Prince, founder of Proud and Pretty in Pink, a Fontana-based self-esteem and body image organization.

Hall continued to struggle with anorexia as she entered high school, despite the therapy she underwent in middle school.

At her thinnest she weighed 82 pounds at a height of 5 feet 5 inches in the ninth grade.

“Whenever I would look in the mirror I would think ‘There is so much you could work on,’” she said.

Hall’s battle with body image and eating disorders is common.

The National Eating Disorders Association cites sources, which estimate that more than 20 million women and 10 million men in the United States have an eating disorder at some point in their lives. NEDA also cites studies that show up to 81 percent of 10-year-olds are scared that they are fat. Hall said starving herself had become a routine, and at times eating food would physically make her sick.

Heather Russo, site director of the Renfrew Center, an eating disorder treatment facility in Los Angeles, said that eating disorders are identified early on by a person’s functions rather than their weight. Hall said her outfits each day would be baggy sweatshirts and sweatpants even when temperatures were 80 degrees.

“I didn’t really like anything tight on me, I always hid my thighs mainly, I always wore a jacket because I was always cold,” she said.

It was not until she fainted again during physical education class in high school that her father said the words that she said flipped a switch in her brain: “You’re not even going to make it out of high school because you will be dead by then.”

After the incident, she started seeking therapy on her own terms. By her junior year, she had recovered enough to stop going to therapy on a regular basis.

“We want to work on this idea that all foods fit, which basically means we want to eliminate all of this good-food-bad-food mentality so people aren’t restricting carbs or they aren’t terrified of eating fats or keeping down the fats once they’ve eaten them,” Russo said.

Hall also had a serious fear of donuts. Even the smell of them would make her feel sick because she felt they were so fattening.

Treatment for eating disorders usually includes nutrition, therapy and medication, if needed. Hall underwent training for nutrition, including writing in a food journal to track food intake. She also worked in therapy to get to the root of her eating disorder.

Savannah Caballero, a 20-year-old student at Mt. San Antonio College and a longtime friend of Hall’s, teared up as she recalled watching Hall suffer throughout high school. As a friend and fellow member of the high school dance team, Caballero remembers comforting Hall when she was picked on and teased.

“Having her recover makes me happy because she realized she is a healthy person who can overcome anything,” Caballero said.

Hall eventually connected with other people her age experiencing the same problems. She said she started sharing her story with other people and eventually began mentoring people who were living with eating disorders. Hall said she has future hopes of starting a nonprofit organization to help others.

“I think overall being a mentor toward girls is what really helped me overcome the struggles,” she said. “To help someone with the struggle that I once had is really inspiring to do.”

Body image is still something that Hall struggles with.

“I have a fallback and I won’t eat when I get depressed,” Hall said. “When it comes to depression, it will last maybe a week or at the most two weeks, but because I learned that those are my eating habits, and that’s my personality, I will force myself to eat because I understand why I don’t eat, and I won’t allow myself to go back to where I was in middle school and high school.”

Kellie Galentine can be reached at kellie.galentine@laverne.edu or on Twitter @kellie_gal.