By Deonah Cendejas, Jolene Nacapuy on May 1, 2015 in LV Life 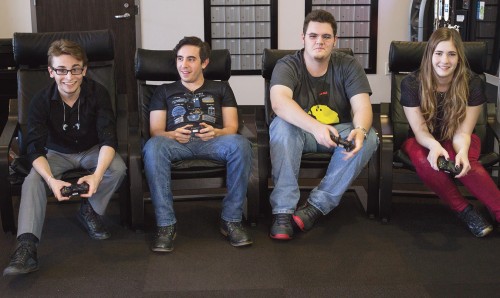 The Gamers Guild club is on a mission this year to get gamers at the University of La Verne to come together to build a gaming community. The executive board includes freshman vice president Sean Gribbin, sophomore secretary Neema Badihian, freshman president Jack Bowman and freshman treasurer Maddie Neely. The e-board plays various video games, such as Mario Kart and Super Smash Brothers, often two times a week from 4 p.m. to 7 p.m. in the Leo’s Den at the Campus Center. In their quest as a first-year created club, the Gamers Guild hopes to reach a larger audience and connect with everyone on campus. / photo by Jolene Nacapuy

The Gamers Guild members compete against one another in “fight nights” every Tuesday and Thursday from 4 p.m. to 7 p.m. on the first floor of the Campus Center in Leo’s Den.

The club is dedicated to building a common passion for videogamers on at the University of La Verne.

“Basically, they’re a bunch of students who love to play video games,” said Hervey Malone II, assistant director of admission and advisor of the club.

“That’s their passion and they wanted to provide a community to connect with other students.”

“We want to bring the students together on campus since we have a club for everything but not for video gamers,” Bowman said.

“It brings all of the different groups on campus together and you make friends where you didn’t have them before,” he said.

The club is devoted to establishing a group in which students feel they belong. They participated in the club fair at Spotlight Weekend, an event for admitted students. Through this, Gamers Guild was able to show a fun side of La Verne.

“We are looking to enrich people’s lives in a way,” Bowman said.

“A lot of clubs on campus are high maintenance and really stressful and we are looking to help students relieve that stress.”

So far, the club has more than 60 members.

“I feel this club has the ability to grow to 100 students,” Malone said.

“Once they get out there and hold more tournaments and events, they can really get the community more involved,” he said.

The members enjoy playing video games such as Super Smash Bros and Mario Kart on the Wii together.

“We also competed in a tournament this last month called ‘Heroes of the Dorms,’” Bowman said.

“The winners were a team of five who received free tuition for the rest of their college career,” he said.

This national competition shows video game clubs and gamers are a society within themselves, not just local to La Verne.

Gamers Guild has a partnership with The eSports Association, which provides goodies, giveaways, and free games so the students can build their status on campus.

“They have a vision,” Malone said. “I feel this club will be around for years to come.”