By Celine Dehban, Jennifer Jackson on May 1, 2015 in News 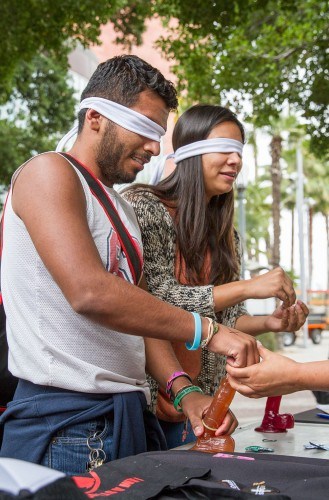 Duran had tables set out with candy, water, educational brochures, pens and condoms.

“What inspired me to throw a health fair on campus was the fact that a lot of people have sex,” Duran said. “We aren’t preaching about not having sex, we are talking about having safe sex.”

Representatives from G-Spot and the Strong Women series were on hand to provide additional information, as well as the on-campus health services.

G-Spot is a social network for young gay and bi-sexual men.

“Because HIV numbers are high in the gay and bi community, it’s kind of an intervention. Being gay, bringing awareness is something I find passionate.”

Pacheco explained that his program is one of many within the Whittier Rio Hondo AIDS Project.

The G-Spot also provides a safe place to talk about various topics in relations to safe sex.

“We go to a lot of drug recovery homes and also do outreach to get women in the community to come to these classes,” Claudia Pinedo, main coordinator and health educator for the Strong Women Series said.

“Ever since I was in high school I always thought women have the right to take care of themselves, we don’t have to essentially give that power to someone else,” she said.

The goal of these classes is to educate women on HIV transmission and prevention and empower them to be able to have a conversation with their partner about using protection.

“We go to college campuses to bring awareness about the condom,” Pinedo said. “What I do for the outreach is show students how to put on a condom.

There’s little things we forget, like not having an air pocket or putting it on the right way or in the dark.”

Duran spent three months organizing the health fair, which included press releases and getting approval to have the outside organizations come on campus.

“It’s a campus of college students so I would assume people would want to practice safe sex more than anything,” Duran said.

Students passing by the fair could stop by the tables to spin a wheel and win a variety of prizes. Prizes included buttons, lube, cock rings, flavored condoms, and inserters.

“I thought it was very educational but also humorous at the same time,” Ryan Gray, freshman international business and language major, said. 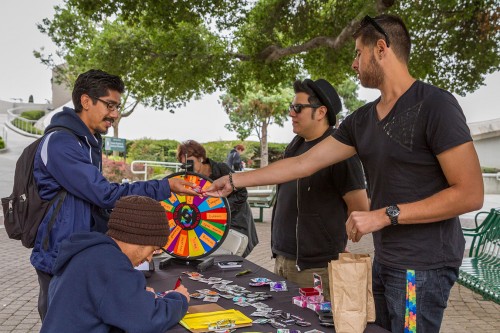