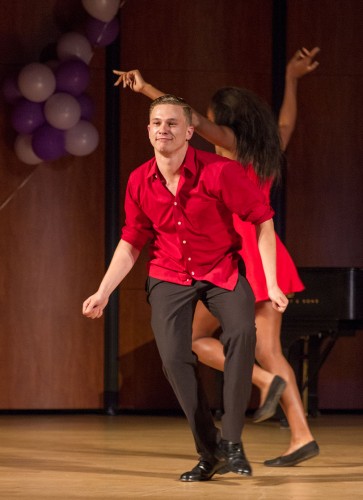 Junior Zachary Robertson, from Sigma Alpha Epsilon, does a Latin dance routine with sophomore Sigma Kappa member Kelsi Robinson at Sigma Kappa’s Maine Man pageant April 30 in Morgan Auditorium. After judging and voting, Robertson was crowned as Sigma Kappa’s Maine Man out of twelve contestants, as he demonstrated the sorority’s core values of personal growth, loyalty, friendship and service. This was the first year Sigma Kappa held the “Maine Men” contest, raising more than $500 for the Maine Sea Coast Mission and the Sigma Kappa Foundation. / photo by Celine Dehban

Twelve men competed for the title at Sigma Kappa Sorority’s first ever “Maine Men” contest but only junior English major Zachary Robertson was crowned the winner April 30 in Morgan Auditorium.

“It’s really a good feeling,” Robertson said. “I’m really excited just to be able to say I was a part of something as great and as well put together as this.”

The competition had three categories including a costume contest, talent and question-and-answer segment.

“The contestants all had great talents, they had great stage presence and the crowd loved them so I was really happy that everything went smoothly,” said junior vice president of philanthropic services for Sigma Kappa Sierra Dasher.

Dasher spent months leading up to the contest organizing the sorority’s first male contest to raise money for the sorority’s philanthropies including the Maine Sea Coast Mission, which the pageant was coined for, and the Sigma Kappa Foundation.

By selling “Maine Men” calendars featuring all 12 contestants as well as having a $2 admission price, the contest raised more than $500. In order to be chosen as Sigma Kappa’s Maine Man the contestants had to exemplify the sorority’s core values of personal growth, loyalty, friendship and service.

The competition started off with the costume portion where contestants strutted across the stage showing off their nautical themed apparel. There were floaties, flippers, beach balls, lifeguards, sailors and a special appearance by “Mermaine Man” and “Barnacle Bae.”

The contestants then had to regroup, change their clothes and get ready to perform their talents for the judges and the anticipating audience. Some talents included ribbon dancing, martial arts and salsa dancing.

When the last dance was finished, it was question time. The contestants stood on stage in a semi-circle and answered two impromptu questions each. After all of the questions had been answered, the judges tallied their scores and the audience voted via text message for their favorite Maine Man.

While there could only be one Maine Man, the sorority honored four other men who displayed its core values. Junior international business major Moberg received the service honorable mention.

“There’s a lot of things going on this time of year, we’re all really busy but being recognized for service and helping out Sigma Kappa sorority in that regard, that was a very nice thing to walk away with tonight,” Moberg said.

“I was so excited when I got the friendship award because friendship is just everything,” Silva said. “The most important thing to me in life is love and without friends or family, you don’t have that.”

“I feel very accomplished because two days ago it was rehearsal and I couldn’t perform my talent,” Coromac said. “I froze so much, but Tyler Harrison … believed in me and performing tonight I think it really showed.”