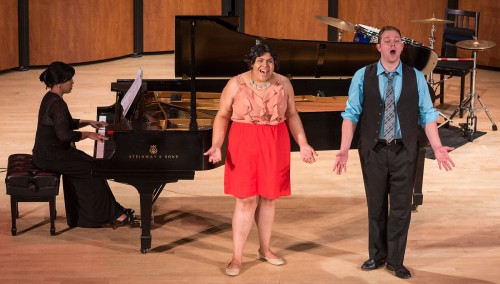 Pianist Jennifer Cruz accompanies mezzo-soprano, Vicky Campos, and baritone, Stephenson Holder, for the song “First Date/Last Night” from the musical Dogfight as a part of the Best of La Verne’s Music Faculty and Students recital at Morgan Auditorium Sunday, May 3. The recital included classical, jazz, and popular pieces performed by faculty of the music department and performance scholarship recipients. / photo by Daniel Torres

Sundays at the Morgan featured a “Best of La Verne” recital where faculty and performance scholarship students performed a variety of music styles like romanticism and musical theater Sunday.

The recital was a combination of vocal and piano pieces, with one performance also consisting of drums.

“Everybody complimented all the different areas of music, from classical to jazz,” said Richard Hribar, the husband of Marge Moh Wei Chen-Hribar senior adjunct music professor. “That’s what made it superb.”

The recital opened with “Prelude in B Minor, Op. 32 No. 10” by Russian composer Sergei Rachmaninoff and performed by Chen-Hribar.

The piece began slow and wistful before growing in tempo. There were small pauses that would slow down before becoming louder.

The piece went back and forth until it settled into a melancholic, yet soothing sound.

“I really wanted to understand the piece and let that understanding come through my playing,” Chen-Hribar said. “I need to take on my demon and to overcome my self-doubt and my fear.”

It was a dynamic piece full of energy that sounded like the notes were chasing each other.

“I really like playing big, emotional pieces so I kind of find the dramatic ones,” Eager said.

The duet “First Date/Last Night” from “Dogfight” was an entertaining piece about two people on a first date that are reluctant to be there.

“I come to a lot of the performances here,” said Shaina Greensweight, a friend of some of the performers. “I was here to see Vicky and also Carol (Stephenson instructor of music) because I’ve never seen her perform. I thought they all sounded great.”

After the duet, Holder performed two solos. The second solo was “King of the World” by Jason Robert Brown from “Songs for a New World.”

The piece included Cruz on piano and Music Department Manager Steven Biondo on drums. It was lively and upbeat despite the pleading lyrics from the singer to be set free to return to his life where he had everything.

“This was actually one of (Professor of Music) Kathy Lamkin’s favorite pieces, and she’s retiring so I did it for her,” Nemback said.

Soprano singer Annie Johnson sang “Just One of Those Things” by Cole Porter with Professor of Music Reed Gratz on piano.

Gratz ended the show with the piano piece “Autumn Leaves” by Joseph Kosma.

“It’s hard to put into words,” said audience member Freddie Salazar. “I really enjoyed the interpretation of ‘Autumn Leaves’ by the professor.”