By Daniel Torres, Jolene Nacapuy on May 1, 2015 in Baseball, Sports 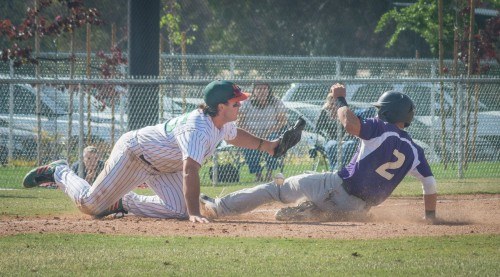 La Verne sophomore third baseman Jakob Thomas misses the connection with sophomore pitcher Alex Bernstein, after a strategic bunt by Whitter Poets senior left fielder Ben Cerami in game two Sunday at Ben Hines Field. On the next batter, the Leopards were able to make a double play to end the top of the fifth inning. La Verne struggled with a powerful Poets offense and errors throughout the game, as it went into extra innings. La Verne was unable to silence the Poets, losing their final game of Southern California Intercollegiate Athletic Conference pool play, 10-9. This loss extends their losing streak to three. / photo by Daniel Torres

The baseball team came out of a tough loss, as they dropped their third straight game in Southern California Inter­collegiate Athletic Conference Pool Play, losing 10-9 in 10 innings, against the Whittier Poets Sunday at Ben Hines Field.

“All of us are terribly disappointed at the way we played the whole week.

We had a chance to win the conference championship, so it’s terribly disappointing. I’m proud of all of our guys, I’m never not proud of them, so I’m always proud of their efforts, but we just came out flat this whole week,” head coach Scott Winterburn said.

“This time of the year, the team’s that play the best win the games. It’s not easy, but it’s a simple formula,” he said.

Despite dropping their last three games, the Leopards managed to earn a spot in the SCIAC Postseason Tournament.

La Verne got to a hot start, as they got on the board with two runs in the bottom of the first inning.

The Poets answered right back in the top of the second, taking a 3-2 lead.

In the bottom of the third, the Leopards managed to tie the game.

In the bottom of the fourth inning, the Leopards took a two run lead, after a sacrifice fly by Thomas, which allowed junior shortstop Woody Reyes to score.

A throwing error by the Poets in center field, allowed Douglas to score from third, 5-2. Whittier managed to answer right back in the top of the fifth inning.

Then junior center fielder Jonathan Whipple was able to score on an error and the Poets only trailed by one, 5-4.

Before ending the top of the fifth, Martinez singled to left field and Zavala scored, 6-5.

The Poets extended the lead, 9-5, in the top of the sixth, as Pimm singled up the middle, bringing in Whipple and Lamar.

The Leopards answered back in the bottom of the sixth to cut the deficit to two, scoring two runs, 9-7.

“We definitely didn’t get down, we just kept punching back after the fifth and the sixth inning and our offense just found a way to kick it up,” freshman pitcher Nick Byrd said.

Thomas hit a sacrifice fly to left field and scored Watkins, then on an error from the outfield, Douglas stole home.

In the bottom of the eighth inning, Thomas was able to single through left field and scored Douglas.

With the pressure to tie the game and go to extra innings, the Leopards picked up some momentum.

Watkins singled up the middle to score freshman pinch runner Nick Michaels and tied the game at nine.

“It felt really good to tie it, in that situation especially, it felt good to come up big for my team there and hopefully let us win the ball game, it just didn’t work out, but it gave us a nice adrenaline rush going and it felt good,” Watkins said.

La Verne was unable to finish the game with a win, as the team headed into extra innings.

“I thought we were going to win,” Douglas said.

“We had it right there and stuff is gonna happen that you can’t control and though we thought we had it and win, but didn’t,” he said.

In the top of the tenth, the Poets were able to score on a wild pitch, 10-9, and the Leopards could not answer back, resulting in a tough loss in extra innings.

“I felt like we were in a good position being the home team in a tie ball game and we made a mistake in the tenth inning and they forced the action, tried to squeeze and we didn’t handle it very well,” Winterburn said.

“Now if you’re in a deficit and don’t get hits you don’t win, so we felt good going into the extra innings, but it just didn’t work out,” he said.

In game one of the doubleheader, the team could not hold Occidental back, as they were shut out, 4-0.

The Beavers were able to get on the board early in the first inning to take a 1-0 lead, as sophomore right fielder Devon DeRaad singled to center field and scored senior designated hitter Jonathan Brooks.

In the top of the seventh, Brooks hit a two-run homer to right field, 4-0.

The Leopards managed to get runners on base, but were not able to send any home, as Occidental took the win.

“They were tough games, Oxy wasn’t going to let us off the hook and they played tougher than we did,” Watkins said.

“Whittier gave us everything they had and we battled all day long, battled and battled and it just didn’t work out in our favor,” he said.

Watkins and White both went 2-for-3. The Leopards will face the Cal Lutheran Kingsmen in the SCIAC Postseason Tournament 3 p.m. at Sparky Anderson Field.

“We just have to be tougher and in baseball you send nine guys to the plate in a row and if you’re tough for nine guys in a row, then you got a really good chance of every inning that you play and that’s what we try to do and hopefully we get another chance to do that,” Winterburn said. “It comes down to our at bats.”