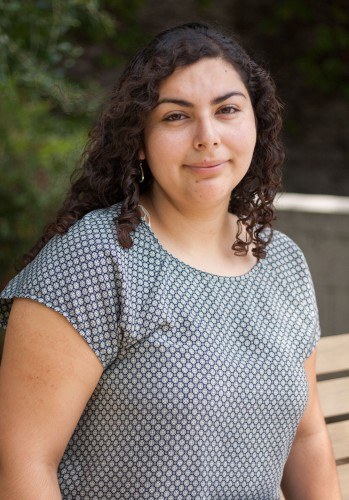 Junior criminology major Abril Camarena received the Newman Civic Fellow Award at the annual Spirit of La Verne Awards April 28. She is involved in several organizations, including the Dolores Huerta Foundation. She also organized a rally in December to raise awareness for the 43 missing students in Mexico. / photo by Bailey Maguire

Junior criminology major Abril Camarena was recognized as the 2015 Newman Civic Fellow by the Campus Compact for her dedication and commitment to social activism.

After hearing the news of the 43 missing college students in Iguala, Mexico, she felt compelled to spread awareness. The students disappeared after the police arrested them at a student protest. They were later confirmed to be killed and incinerated.

Camarena organized a demonstration last December in Sneaky Park, where students and faculty from La Verne and neighboring communities joined.

The demonstration received media coverage from NBC, Telemundo and the Daily Bulletin.

“My favorite part was when we read names of each student and had a moment of silence for them,” Camarena said.

Camarena is also a member of the Latino Student Forum and works with the Latino and Latina Roundtable in Pomona.

She was nominated by President Devorah Lieberman for her demonstration of leadership in the community.

Last summer, she participated in a summer service program where she worked with the Dolores Huerta Foundation, participating in protests, demonstrations and walks.

“It transformed me to be more responsible to stand up for what I think is right,” Camarena said.

Her actions show her commitment to making the community stronger and more equitable, according to Zandra Wagoner, University chaplain.

“Over the course of this past year and a half, she has shown a lot of growth and development as a student and as a leader,” said Marisol Morales, director of civic and community engagement.

“She is able to connect issues that are happening nationally and internationally back to the campus and create a space for the voice of youth to participate in major issues,” she said.

The club helps raise awareness and provide support for undocumented students and allies at the University.

“She has brought La Verne her gift of activism,” Wagoner said. “She has helped to empower students to express their voice and work for changes that really matter,.”

Camarena is deemed by Wagoner for having a heart of gold and deeply moved by injustice.

“She is bold,” Morales said. “She is willing to go out there, talk to people, stand up and make her voice heard.”

“I think she is growing as an activist and as a strong voice in the Latino community,” she said.