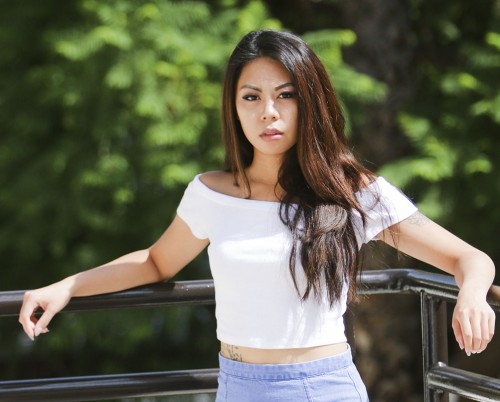 Mariel Cornel, a professional fashion blogger and senior double major in communications and creative writing, is extensively involved in the fashion community. With hundreds of followers on her Instagram, she is constantly providing the world with her interpretation of style and class. Cornel aspires to model after she graduates for Herve Leger or BCBG. / photo by Gabriel De Alba

While many students balance responsibilities like jobs, sports and classwork, senior Mariel Cornel manages her time in the world of fashion.

“If it doesn’t make me happy, why do it,” Cornel said. “Do what you love and money will always follow.”

As the model of her own fashion blog and intern for the clothing line BCBG, Cornel has stepped into the field of her dreams before she has even graduated.

At 21 years old, she is a sorority member, dancer, writer and double majors in communications and creative writing.

While originally discouraged by counselors to double major, Cornel decided to keep both passions in her life.

Her parents kept her involved with many activities since she was little, so she finds it easier to balance what she does now.

“They measured my ankles and how high my socks could be,” Cornel said. “For them to just shut that off, it pent up creative energy.”

After following fashion bloggers since she was young, Cornel was inspired to create her own blog.

Cornel only posts original content, most of which is photographed by her photographer boyfriend, Justin Quebral.

“Like yin and yang, we influence each other,” Quebral said. After becoming friends on Tumblr when they were 15, Cornel and Quebral eventually reconnected on Instagram before meeting in person.

They now work together on photo shoots and keep each other’s styles balanced.

Mixing business, a relationship could prove to be a problem with anyone else, but Cornel and Quebral have learned the right balance.

The pair feel that they work well together and they are both proud to create something they are passionate about.

At her internship for BCBG, Cornel works as a copywriter for digital and print media.

“I never get bored,” Cornel said. “(Copywriting is) something I can always work on.”

After a friend referred her to the internship, Cornel applied several times before she began her internship this fall.

Cornel says she loves her position at BCBG because of the workshops the company has for interns to improve skills, like resume writing.

Cornel credits her Phi Sigma Sigma sorority sisters as some of her main sources of motivation to continue her passions.

“My sisters have been constantly engaged, always keeping up with what I’m doing,” she said.

As Nguyen’s big, Cornel serves as her mentor and support.

“She always says she believes in me,” Cornel said. “She tells me, ‘You’re not allowed to cry.’”

Another sister, Stephanie Osorio, senior kinesiology major with a minor in business, is one of Cornel’s closest friends.

Although Cornel has an incredibly busy schedule, both friends make time for each other.

When not bonding over Korean food or karaoke, Osorio helps Cornel with modeling.

“It’s just like going to L.A. with your friend, except she’s having a photo shoot,” Osorio said.

Cornel is a firm believer in following her own dreams, she passes along that wisdom when she can.

With so many different activities and ventures, Cornel tries to balance many things in her life.

Cornel said her biggest weakness is “saying yes to too many things.”

Time management is her biggest ally, and she depends on an Excel spreadsheet to keep everything organized.

She keeps her priorities straight by focusing on the long-term benefits of what she does and always prioritizing her passions.

Cornel will graduate in January 2017 and plans to continue to make herself known in the fashion industry by modeling and blogging.

“I feel like I have made my mark,” Cornel said.

One Response to Cornel is model for fashion goals