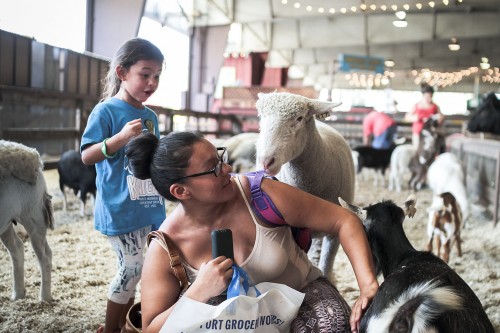 Francis Perez and Nevaeh Acosta, residents of Covina, were surprised by the hospitality of the animals Sept. 10 at the Los Angeles County Fair’s petting zoo, during the Fair’s La Verne and San Dimas Community Day. Sheep, goats and pigs are among some of the animals the Fair hosts on its farm, which includes the biggest petting zoo in California. The Fair is also returning to its agricultural roots by adding four new acres of farm land that guests can explore. The farm’s goal is to teach residents of all ages about sustainability, how to eat healthy, growing crops and the process of food’s delivery. / photo by Ben Camacho

“The right people were there, which is more important than the amount of people,” community relations coordinator, Shanell Fuquay said. “Mayors, principals and (ULV President) Devorah Lieberman all went to support.”

The La Verne community was given discounted tickets online and ULV students received free admission to the Fair.

The Fair also has community days for other surrounding cities such as Pomona, Claremont and Glendora.

In addition to the normal Fair attractions, there was a parade featuring community organizations such as the Girl Scouts, Boy Scouts, elementary schools and fire department.

Fuquay said any organization could participate and it is a good way to show the involvement of non-profits in the community.

Included in the Fair festivities were three selected community heroes, who were presented with plaques and applause.

The three community heroes were also showcased in the parade.

A high school marching band competition for local high schools and business expo were also put on by members of the La Verne and San Dimas community.

Fuquay said she noticed a lot of community engagement throughout the day and enjoys connecting with all of the fair participants.

Daniel Hess, guest relations worker and former ULV softball coach, said he likes the Fair’s community days because of the familiar faces he gets to see.

“It makes you feel good to be a part of something,” Hess said. “The probability is good that you’ll see someone you know.”

Hess said he has gone days working at the Fair without seeing any faces he recognizes, but during community days he runs into many people that he knows.

Despite La Verne Day’s special activities, Hess said he believes the food remains the biggest attraction of the Fair.

“Where else can you get deep fried chocolate bacon?” he said.

The Fair features a vast variety of food from frog legs to fried Oreos, and from tacos to falafels.
Deborah Gonzalez, freshman political science major, went to the Fair on a date and said her favorite part of the night was going on the rides.

“We went on the Ferris wheel,” Gonzalez said. “It was so pretty to see everything from above.”

The Fair also has traditional carnival games, high-speed rides, bungee jumping and the famous Sky Ride that takes riders up over the Fair and drops them off on the other side.

The Fairplex added nearly five acres of agriculture and animals this year for guests to learn about and interact with. Pigs, sheep and birds are just some of the farm animals that can be fed and touched.

Four acres of the farm’s crops will remain open to the public for the year.

The Fair continues until Sept. 27 at the Fairplex in Pomona.

Discounted tickets are available at the Campus Center desk.

Museum opens after hours for Claremont community
Album Review: Shannon and the Clams clam up