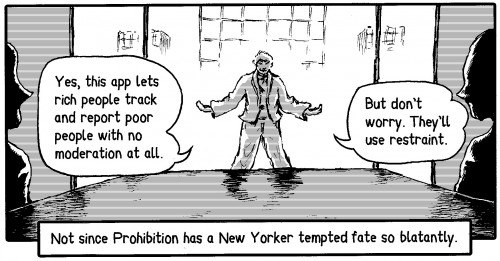 David Fox, a 25-year-old web developer from New York, has taken it upon himself to try to help end the homeless problem in New York.

In order to do so, he created a phone app called “NYC Map the Homeless,” where New York residents are encouraged to take photographs of homeless people and upload them to his app using hashtags.

The photo is then placed on a map with a pin, tracking where certain homeless people have been spotted around New York City.

Since its launch in August, the app has recorded more than 1,500 posts and has been downloaded more than 2,000 times.

Its description on the app store boasts that the app is “a simple and easy volunteer crowd-sourcing solution” and that it “gathers data and produces answers.”

But to what end?

Fox claims “the purpose of the app is to actually help homeless people by encouraging users not to simply walk by” according to an article posted on theawl.com.

What he doesn’t realize is that he is promoting a public shaming of any and all homeless people.

Users can use hashtags that can be considered degrading and offensive to people whom they know nothing about. Some of the hashtags include “#violent,” “#smokingpot” and “#psychotic.”

A more productive approach would be to have people actually help the homeless.

There are people who are more than willing to help mediate the homelessness situation, but this app is definitely not a viable solution.

In most cases, people don’t just choose to live on the streets. It is unfair to take away any right to privacy that these people may have left.

While this app may have been created with the public’s best interest in mind, it actually creates a bigger problem. It is an elitist smack in face to anyone who is less fortunate.