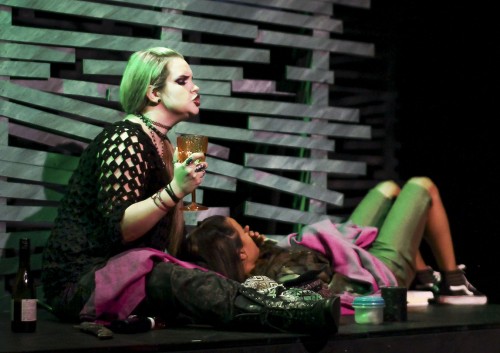 Penny (senior theater major Chase Montano) and Breanna (senior theater major Shelby Liburd) try to deal with the chaotic aftermath of a classmate’s disappearance in the Oct. 9 performance of “The Chalk Boy” in the Jane Dibbell Cabaret Theatre. Written by playwright Joshua Conkel, the story centers around the mystery of a missing teenager, Jeff Chalk, and features witchcraft, kidnapping and drug use. / photo by Ben Camacho

In a collaboration of efforts, four University of La Verne students debuted their senior project production of “The Chalk Boy” last week in the Jane Dibbell Cabaret Theatre.

“The Chalk Boy,” directed by Songco and stage managed by Soto, follows the lives of four teenage girls after the disappearance of Jeff Chalk, a popular athlete from their high school.

“I really want people to see what teenage girls go through,” Songco said.

Penny Lauder (Montano) and her best friend Breanna Stark (Liburd) struggle to find normalcy in the aftermath of Chalk’s vanishing.

From the topics of witchcraft to dealing with an overbearing mother, the play makes for a thoughtful yet satirical look at what it is like to be a teenage girl.

“The Chalk Boy” had many moments of dark humor that were sure to stay with the audience long after the play was over.

With strong, emotional acting from Montano and Liburd, as well as clever interpretations and character shifts from Jardel and Guillory, this production was memorable and thought-provoking in confronting serious issues.

The play touched on teen challenges, including sexuality, teen pregnancy and relationships between parents and their children. It also dealt with religion, friendship, insecurities and being an outcast.
Junior theater and business administration major Laney Poe designed the costumes.

To make this senior project their best work possible, Songco, Soto, Montano and Liburd have worked tirelessly since spring along with Jardel and Guillory and the stagehands.

They held extra rehearsals and meetings to build a stronger bond and on-stage chemistry.
Often completing more than six hours of preparation a day, Soto said the team felt “bittersweet” because their work is over, but at the same time they can finally enjoy the finished product.

Songco took inspiration from her younger sisters and said the play was dedicated to them, even if that brought added pressure on her.

“My sisters know theater. They know how to nitpick theater,” she said.

Soto credits the rest of the crew and actresses for the success of the play.

“Without the rest of our crew, we’re nothing,” Soto said.

Montano and Liburd both said they were changed by their characters.

“(I) tried to remember what it was like to be that lost,” Montano said of Penny. “I hope (the play) doesn’t make (the audience) feel pessimistic.”

Liburd said playing Breanna has changed her own outlook.

“I try to see the better side in people,” Liburd said. “I relate to her in style and optimism.”