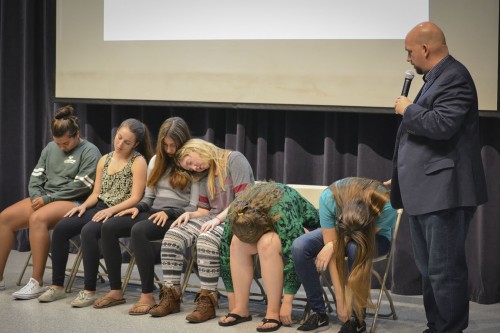 Throughout the show, Ramsay used his ability of hypnosis and suggestion to lead audience members into trance-like states.

With his words, some audience members forgot their own names were nearly put to sleep or performed onstage.

Some participants were more susceptible to hypnotism than others.

Six students were noticeably affected by the hypnotism exercise, some of who were slumped in their seats and were then called onstage by Ramsay.

Ramsay’s performance kept the audience engaged with laughter because of a strong interactive element.

The audience voted for what they wanted to see the onstage participants do.

From performing a Guitar Hero simulation to dancing in a ballet, the audience was consistently amused by the onstage antics.

Freshman biology major Gabrielle Thomas nearly believed what she did on stage was real.

In one portion of the show, participants were told they were listening to Idina Menzel sing “Let it Go.” They were told that the stage would feel “frozen” each time Menzel sang the song’s title.

Thomas, along with the others onstage, shivered and hid inside their shirts and sweaters throughout the song.

After the hypnotism ended, Thomas was convinced that Menzel actually performed on stage.

“It started getting cold during ‘Let it Go,’” Thomas said. “I wanted to get (Menzel’s) autograph.”

The participants also competed in what they believed to be a Guitar Hero world championship.

The six students jumped around stage each playing an air guitar, fully confident in their performance. Then they were asked what they wanted to do with their prize money if they won the championship.

Without hesitation, freshman biology major Shay Duffy said she wanted to “take over the world.” Later, Duffy remembered what she had done on stage.

Ramsay enjoys how much hypnotism positively impacts the lives of those he meets and uses his talents to help others conquer their fears or break unhealthy habits.

“It allows me to indulge in my own desire to be an entertainer,” Ramsay said.

Ramsay also uses the techniques on himself when he is stressed or has trouble sleeping.

Ramsay was first introduced to hypnotism at the University of New Hampshire where he worked as a resident hall director.

After a retired hypnotist came to perform for Ramsay’s residents, Ramsay became interested in what would later become his hobby and career. He became certified by the National Guild of Hypnotists and still holds a passion for hypnotism 11 years later.

“I thought that it was super funny,” Ghanadian said. “I just hope more people come next time.”

“If I can get this place filled, I think that’d be awesome,” Ghanadian said.