By Kaila Williams, Nanor Zinzalian on October 9, 2015 in Soccer, Sports 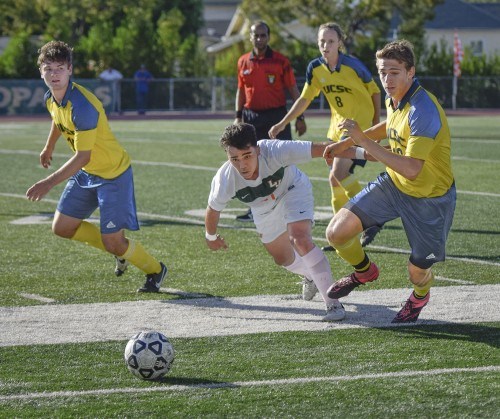 Sophomore midfielder Javier Jasso battles for the ball in the first half while trying to score a goal against UCSC freshman forward Jacob Meyers Norys Saturday at Ortmayer Stadium. La Verne topped UC Santa Cruz, 1-0, for its fourth consecutive win. The streak was snapped with a 3-1 loss to Chapman Wednesday. / photo by Nanor Zinzalian

Chapman scored three goals in the second half Wednesday to hand the La Verne men’s soccer team a 3-1 loss.

La Verne had won its previous four matches and is now 10-3 overall and 6-3 in Southern California Inter­collegiate Athletic Conference play.

The game began with full momentum from both sides as both teams broke for goals but were stopped.

A pair of yellow cards were given to Chapman sophomore defender Kannon Kuhn and La Verne junior forward Saul Uribe in the 10th and 12th minute, respectively.

La Verne was able to get on the board first, scoring off a penalty kick. In the 21st minute, Uribe was knocked down by one of the Chapman defenders in the penalty box.

Junior forward Nathan Gonzalez stepped up and put the ball into the middle of the net, giving La Verne a 1-0 lead.

“I was waiting for the goalie to dive and he dove left so I just went to the middle,” he said.

La Verne dominated the first half and was able to suppress Chapman’s frequent attacks.

“We had a game plan and I feel we stuck to it,” Bangle said. “We had a couple errors but we’ll get it next time.”

Coming into the second half Chapman had a surge of energy and pushed forward quickly.

Chapman equalized the match in the 48th minute after junior midfielder Cole Peters took a chance and shot from about 30 yards out for the goal.

The Panthers took the lead in the 55th minute with a goal from junior midfielder Dan Friedman off a corner kick from midfielder Boston Kimmel.

Friedman was able to find the back of the net despite the crowd in the box, putting Chapman up 2-1.

The final goal of the night came in the 71st minute.

Senior Chapman midfielder Gino Belassen shot and scored from just outside the penalty box, making it 3-1. A last effort from the Leopards proved they were not going to go down easily.

“It won’t affect us. We have to stay with the season objective,” head coach Trevor Persson said.

The Leopards, who are still in contention for the SCIAC playoffs, will host the Occidental Tigers at 7 p.m. Saturday at Ortmayer Stadium.