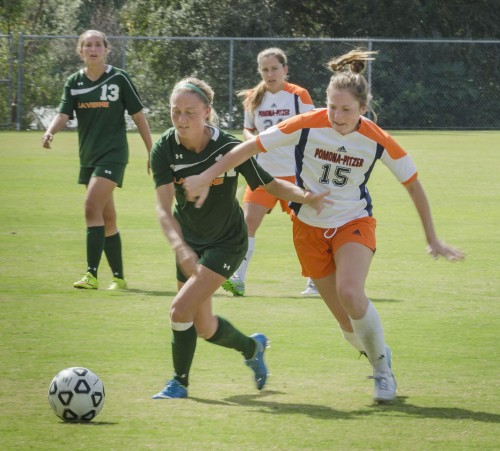 Stealing the ball from Pomona-Pitzer sophomore defender Lindsay Piwinski, La Verne senior midfielder Kelsea Varner attempts to score a goal for the Leopards in the second half of the game Saturday. After a strong fight, La Verne lost to Pomona-Pitzer, 3-1. / photo by Sarah Vander Zon

The women’s soccer team fell short to the Pomona-Pitzer Sagehens, 3-1, on Saturday in Claremont. The Leopards now have a 6-8-2 overall record and a 4-7-1 record in the Southern Cali­fornia Inter­collegiate Athletic Conference.

“I thought the girls played really well,” head coach Lauryn Pehanich said. “We had a specific plan for Pomona that we were trying to execute and we did it really well the first half.”

The game was tied at one at halftime, but Pehanich said the momentum changed after the second half. Sagehens junior midfielder Katie Tao was able to break the tie with penalty kick to the left corner past freshman goalkeeper Jasmine Valadez.

“After that PK it was 2-1,” senior midfielder Kelsea Varner said. “I think our team kind of just went down a slope a little bit.”

Pehanich also said the goal forced the Leopards to change their defensive strategy from four defenders in the back half to three to try and get more numbers on offense.

“They go up, we know that we have to win,” Pehanich said. “For that reason, we then have to go and push and you have to change shape when you push and changing shape changes everything that is going on in the game.”

However, instead of it working in the Leopards’ favor, the Sagehens were able to beat their defense for another goal.

In the 65th minute, Pomona-Pitzer senior midfielder Nicola Ying Fry scored on an assist from junior midfielder Alyssa Kim to put the Sagehens up, 3-1.

The Sagehens came out aggressive in the first half and the Leopard’s defense was able to hold them off until the 23rd minute, when Pomona-Pitzer junior forward Danika Bethune scored on an assist by Kim to take an early 1-0 lead.

La Verne scored its only goal in the 31st minute when freshmen midfielder Ari Dowell scored on an assist from junior forward Alexa Smith.

“I think we had pretty good chances that we didn’t capitalize on and that is what we will have to work on at practice on Monday,” Dowell said.

This marked Dowell’s first collegiate goal with the Leopards.

With this loss, the Leopards must win their final two games and count on losses from a few other conference opponents in order to make the SCIAC tournament.

Pehanich said even with the loss and the long odds of making the tournament, she feels that the defense has improved from earlier in the year.

“What I thought they did really well was we were working on a plan of execution defensively this week and they have struggled with that stuff in the past,” Pehanich said.

Dowell said that while the loss was a tough one to sallow, the team will refuse to get discouraged or lose focus.

“We don’t keep our heads down,” Dowell said. “I think we play for each other a lot better now going throughout the season.”

For Varner, there is a simple solution to winning these next two games.

“Honestly, we just have to want it,” Varner said.

The Leopards also took on the Redlands Bulldogs Wednesday at Farquhar Fields in Redlands. La Verne held off the Bulldogs in the first half but was unable to do the same in the second and Redlands took the match, 3-0.

The team will face the Cal Lutheran Regals at 7:30 p.m. Saturday at Ortmayer Stadium.