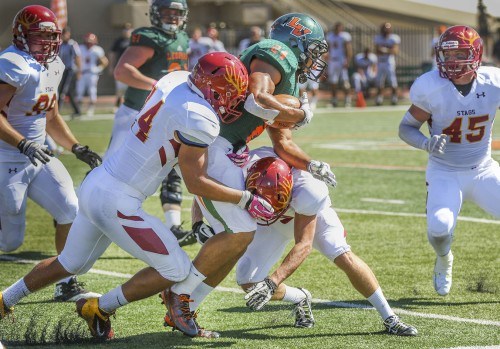 La Verne senior running back Travis Sparks-Jackson rams into a defensive post held by the Claremont-Mudd-Scripps Stags, pushing inch by inch to gain yardage just before the half. Sparks-Jackson finished with 74 rushing yards. The Leopards defeated the Stags in a close game, 32-27, Saturday at Ortmayer Stadium for a Homecoming victory. / photo by Gabriel De Alba

With the clock ticking down from five seconds in the fourth quarter, the intensity continued to rise for the La Verne Leopards and the Claremont-Mudd-Scripps Stags football teams.

The Leopards came out with the win at Homecoming, 32-27, Saturday at Ortmayer Stadium after La Verne senior linebacker Anthony Penalber broke up a pass in the end zone.

“That last five seconds with Anthony Penalber, I wouldn’t want any other person to be in that situation,” head coach Chris Krich said.“I trust him to make that play and he did a heck of a job sealing that win for us.”

CMS took the lead for the first time in the game, 27-26, with five minutes left in the fourth quarter.

Three minutes later, senior quarterback William Livingston ran in from 6 yards to put the Leopards back up, 32-27.

La Verne attempted a two-point conversion, but Livingston was intercepted.

CMS managed to push to the La Verne 19-yard line, but the Leopards’ defense put the pressure on.

On fourth and 10 with five seconds left to play, CMS junior quarterback Trey Reynolds passed the ball to the end zone, but Penalber was there to break up the pass and seal the win.

Penalber finished the game with a career-high 12 tackles and was named Leopard of the Week.

“Anytime you win at Homecoming, it always feels good, especially against a good opponent like CMS, and so it just feels good for our guys to come up with a victory there at the end,” Krich said.

The team improves to 3-1 overall and 2-0 in Southern California Intercollegiate Athletic Conference play.

“I just felt after the Oxy game, we needed to come out and make a statement against Claremont,” Livingston said.  “They’re a really good football team, so it was a real test of how good of a team we are.”

The Leopards scored first in the first quarter.

Though the extra point attempt was missed, the LV was up, 6-0.

Arellano finished with 11 catches for 156 yards. In the second quarter, Reynolds’ pass was intercepted by junior defensive back Joshua Hardy, who returned it for a 70-yard touchdown.

La Verne junior quarterback Zachary Tomlinson came in for Livingston for a two-point conversion and gave the Leopards a 14-0 lead.

The Stags answered back with a 27-yard pass to senior wide receiver Ryan Farney.

La Verne attempted another two-point conversion after a touchdown by junior running back Dallas Parent, but came out unsuccessful.

“I felt like we were moving the ball and we could do whatever we wanted to do and then we just struggled a bit in the red zone,” Parent said.

The team headed into halftime up, 20-7 over the Stags.

CMS started the third quarter with a touchdown.

La Verne answered back, but the extra point attempt was blocked.

It all came down to the wire in the fourth quarter, as CMS held a one-point lead, 27-26.

Livingston rushed in for a touchdown to put La Verne back up, 32-27.

With five seconds left to play and the Stags on the 19-yard line, Reynolds’ pass was broken up by Penalber to seal the Leopards’ victory.

Although the Leopards are on a two-game winning streak, Livingston said they still have things to improve on.

“No one’s perfect, no team’s perfect. We don’t do anything perfect, so we need to work on everything and take it one step at a time everyday,” he said.

Despite giving up 20 points in the second half, the Leopards were able to hold off the Stags.

The Leopards will kick off against the Whittier Poets at 1 p.m. Saturday at Ortmayer Stadium.

“We came out here and we did what we needed to do,” senior offensive lineman Grant Potter said. “We got this dub and we’re gonna come in next week and give it to Whittier, just like we did today.”