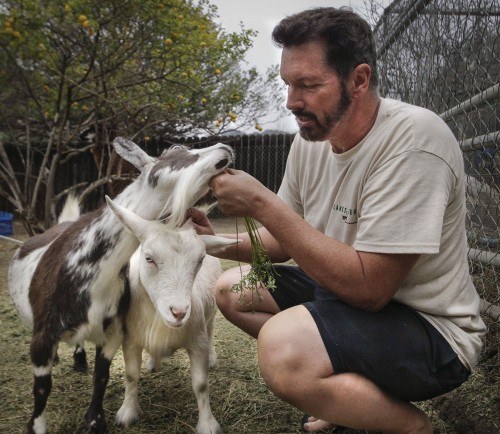 Gary Mitchell feeds his goats Gaia and Calliope carrots, one of their favorite vegetables, at Planet Rehab in San Dimas. Mitchell started the sanctuary in 2002, in hopes of educating people about how the environment is affecting the animals. Mitchell now has over 350 different animals in his backyard, including ducks from China to birds from Australia. / photo by Jolene Nacapuy

Few people have the opportunity to see and touch animals that originate in a different country, feed some of the most beautiful species of birds with their bare hands, or learn about an animal from first-hand experience. Gary Mitchell, the founder of Planet Rehab, is a different story.

Chirps and squawks are audible from the street in front of Mitchell’s home because behind his gates he houses more than 350 animals.

Birds, fish, tortoises, goats, an alpaca, dogs, butterflies, cats and more fill the animal sanctuary that he has in his San Dimas backyard.

“All of our animals have jobs, and that is to be ambassadors to the planet,” Mitchell said.

Planet Rehab is a non-profit organization, which aims to protect animals, encourage environmental education and take action to help the environment.

“It is our hope that when people come here they are touched, because we all need to pull together if we want to save the planet,” Mitchell said.

Mitchell has 40 years of experience with animals and began his sanctuary in 2002.

Guests can go to the Planet Rehab sanctuary and take a tour for a donation, which helps keep up the animals and aid the organization’s future efforts.

Cats immediately greet guests at Mitchell’s front door and his dog escorts them to the back yard where there are multiple habitats full of some of the rarest birds on the planet.

The world’s smallest quail species, blue doves from India, zebra finches from Australia, Mandarin ducks from Asia and a 21-year-old peacock named Samson are among some of the many birds for which Planet Rehab provides a home.

Eric Smith is a volunteer for the organization and says birds are his life-long passion. Ever since a bird-watching trip with his grandmother when he was 4 years old, he has loved birds and he makes it very apparent through his work with Planet Rehab.

“We have six of the world’s most beautiful species of birds,” Smith said.

One of the bird areas allows guests to take bread into the cage, sit on the bench and watch as numerous birds land on them and eat out of their hands.

Mitchell and Smith interact with the birds by singing with them, kissing them through the fence and greeting them when they walk by.

Beyond the bird habitats are goats and an alpaca named Benjamin.

Mitchell rescued Benjamin from poor conditions in San Bernardino and nursed him to health, but he said that when Benjamin was brought to Planet Rehab he cried because his best friend, a goat named Buddy, was back at his old home. After three days of crying, Mitchell negotiated and brought Buddy to Planet Rehab as well.

Mitchell said the animals did a “happy dance” when they were reunited, and he was so inspired by the animals’ friendships that he wrote a children’s book about it, named “Benjamin’s Gift.”

“We have a really cool family here,” Mitchell said.

Walking around the ground of the sanctuary are cats, dogs, squirrels and tortoises.

Guests cannot miss one of the tortoises, Alan, because he weighs at least 300 pounds, according to Smith. Alan has lived in San Dimas for 22 years and Planet Rehab recently took him in.

On the side of the yard is the butterfly habitat. Chrysalises, caterpillars and butterflies all reside in the plant-covered, shady area.

“We have seen more and more activity of butterflies coming and laying their eggs in the sanctuary,” said Aaron Angel, junior zoology major at Cal Poly Pomona and volunteer for Planet Rehab. “We can spread awareness about how they are going extinct and what that could mean for us.”

Mitchell grows five types of milkweed in his yard because it is the only plant on which monarch butterflies can lay their eggs.

He has also planted milkweed in numerous parks in the community to help the monarchs survive.

Mitchell’s goal is to inform the public on the environmental issues and inspire them to get involved.

“We are second to last in the world of understanding global warming,” Mitchell said. “The animal sanctuary is our way of getting people engaged.”

Mitchell has been a vegetarian for nine years and encourages others to be also because it will not only benefit the environment but our bodies as well.

More than 90 percent of global deforestation is used for meat production, and 51 percent of global greenhouse-gas emissions are cause by animal agriculture, according to the People for the Ethical Treatment of Animals.

Mitchell also recognizes the harsh effects of meat on our bodies as beef turns on our cancer cells.

“The one commitment to stop eating animals can extend your life and the planet’s,” Mitchell said.

Mitchell hopes to combat the rising rate of extinction by acquiring rain forest land in Costa Rica where Planet Rehab can build breeding habitats and eventually release the animals into the wild.

On Nov. 14, Planet Rehab will be hosting a hoe down with a veggie chili cook off, petting zoo, craft fair and more.

Before his life with Planet Rehab, Mitchell used to have a show on Carnival Cruises. He has toured different countries around the world, singing and playing the guitar.

His musical background has led him to his next project for Planet Rehab.

Mitchell is hoping to produce a music video for some of the songs he has written that highlight different environmental issues and is looking for volunteers to help with the production.

Anyone can name an animal by paying to sponsor them. These funds go toward helping Planet Rehab sustain the animals and continue their mission of saving the environment.

To sponsor an animal, go to Planet Rehab’s Facebook page or planetrehab.org, or visit the sanctuary at 2745 W. Dalepark Dr. in San Dimas.

“We are a tiny organization but we pack a big punch,” Mitchell said.