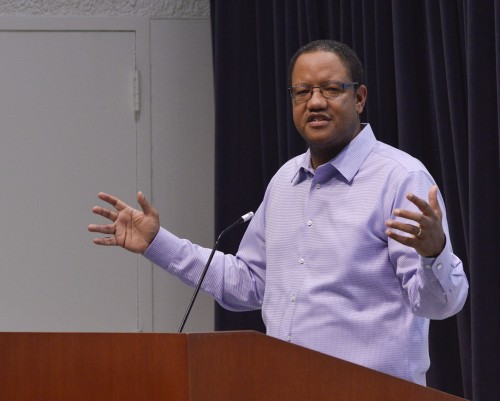 Michael Strautmanis, vice president of strategic programs for corporate citizenship at the Walt Disney Co., speaks Monday in LaFetra Lecture Hall as the keynote speaker for this year’s Career Week, sponsored by career services. Strautmanis shared various ideas he attributes to his success, one of which was to strive to work for others and something bigger than yourself. / photo by Noel Cabrera

Michael Strautmanis, vice president of strategic programs for corporate citizenship at the Walt Disney Co., gave a lecture Monday in LaFetra Lecture Hall on how to deal with failure.

The lecture kicked off Career Week, sponsored by the office of career services.

Strautmanis gave unconventional advice to the students in attendance by telling them there is nothing wrong with failing.

He said students often avoid new or interesting classes because they are difficult and the chances of failure are high.

Strautmanis added that failure should not be a determent while in school or choosing a career.

“I really like how he incorporated failure into the lecture,” freshman biology major Dolan Hunter said. “Basically saying that it is OK to fail, just to make sure to do it quickly and safely where you can recover, and I thought that was really helpful.”

Strautmanis told the audience about his difficulties growing up in Chicago and his own personal experiences with failure.

At a young age, Strautmanis was thrown out of grade school due to poor grades and was uncertain what to choose for his major in college during high school. He wanted to be a theater major and perform on Broadway but realized he was not good at it.

Strautmanis worked for two presidents. First for Bill Clinton he was chief of staff to the general counsel at the United States Agency for International Dev­elopment.

He then served under Barack Obama from 2008-2013 as a deputy assistant and counselor for strategic engagement.

Strautmanis was a key contributor to the president’s agenda on issues such as fatherhood, mentoring and youth violence.

“If there is one thing Presi­dent Obama inspired me to do,” Strautmanis said, “it was to use the fact that I grew up without a father to help other people.”

“It seems like he is very community oriented,” Patterson-Garner said. “One of his goals as far as his career is concerned is definitely to give back to his community. So I really applaud that.”

Along with his job at Disney, Strautmanis is on the board of directors of the Los Angeles River Revitalization Corpora­tion, which is dedicated to reconstructing the 51-mile river to improve the quality of life in the areas.

Hunter said he took away one crucial point from the lecture.

“To follow what you want to take an interest in and to never give up what your passionate about,” Hunter said.