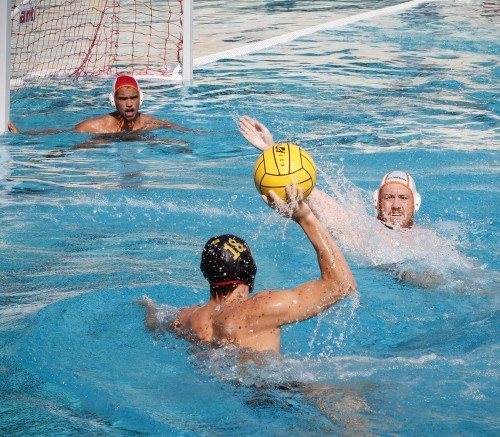 La Verne senior attacker Ryan Batchelor spoils a goal attempt by Claremont-Mudd-Scripps senior attacker Daniel Cogans with a block late in the second quarter of Saturday’s game. The Stags splashed away with the 13-6 win at Axelrood Pool in Claremont, in the Leopards’ first Southern California Intercollegiate Athletic Conference game of the season. / photo by Chelsey Morrison

The win comes after the team’s first SCIAC match, a 13-6 loss at Claremont-Mudd-Scripps Saturday.

“I think we had a solid first half and in the second half, we were trying to get everybody some playing time and definitely had some defensive mistakes,” head coach William Rodriguez said. “But overall we got the W and that’s what’s important.”

With less than two minutes left in the first, Caltech junior attacker Christopher Bradley scored on a fast break from a pass by freshman goalkeeper Shaurya Gilani.

The Leopards answered right back as senior driver Bryan Jimenez found the back of the net with an assist from freshman utility Elias Acosta, giving La Verne a 3-1 lead.

Jimenez scored once again with an assist from junior driver Jared Hopley, to put La Verne up, 4-1, heading into the second.

“It feels pretty good to win, despite being in a slump going from a losing streak,” Hopley said. “So it feels a lot better and it gives us a better mentality going into the following games.”

To start off the second quarter, Jimenez drew a foul that resulted in a penalty shot from the 2-meter line.

Caltech had many 6-on-5 power play opportunities throughout the game because of La Verne fouls. “We got to definitely work on our driver defense,” Rodriguez said. “A lot of our guys are letting people get in front of them and that’s when we get in trouble, so it’s something to work on.”

Despite this, the Leopards were able to shut out the Beavers in the second quarter, entering the third quarter ahead, 8-1.

“We took a big lead initially and we were able to get everyone in the water and some playing time throughout the rest of the game,” senior driver Viken Huening said.

With 6:30 left in the second, Jimenez managed to get the ball past Caltech’s attackers, freshman Eshan Govil and sophomore Richard May for a goal.

The Beavers found a rhythm and scored three consecutive goals in the last three minutes of the quarter, 9-4.

Jimenez found DeNeve-Arnam for the goal to start the fourth quarter, pushing the Leopard lead to 10-4.

DeNeve-Arnam and Jimenez each finished with three goals.

Both teams scored one more time, but the Leopards took home the 11-8 win.

“We need to make sure to convert on our opportunities, especially on our power plays, and then making sure our counter defense is fine tuned before Saturday,” Rodriguez said. “We have a lot of injuries right now, but if we get everybody back together I think we’ll be able to beat some of the better teams in the conference.”