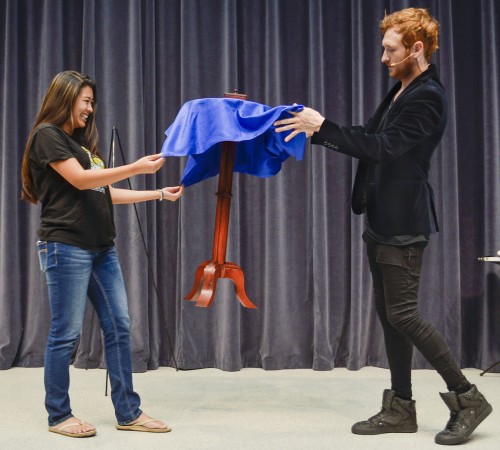 Junior broadcast journalism major Reanna Hilario helps professional magician Joseph Reohm levitate a table in a magic trick at a Campus Activities Board event Oct. 8 in LaFetra. Reohm, who said he has been doing magic since he was 3 years old, was invited by CAB to perform for the Harry Potter-themed Homecoming Week. / photo by Sarah Vander Zon

Magic is considered the art of illusion, but it was no illusion that the students of La Verne enjoyed Joseph Reohm’s magic act on Oct. 8 at LaFetra Lecture Hall as part of Homecoming Week events – even if they could not find the secrets to his tricks.

Reohm, who has been on shows such as Wizard Wars and Fake Off, directly involved the audience in his act, getting a mixture of laughs and gasps in the process.

One of the highlights of the show was a card trick. Reohm guessed a card an audience member had picked by drawing a box of cards on a sketchbook and then making it appear from that deck.

Sophomore kinesiology major Julian Vega, who works for the Campus Center and helped set up for the event, decided to stick around for the show and was not let down.

“It started to be really cool when he did the drawing magic trick,” Vega said.

The card trick was not the only illusion that left the audience in awe.

Reohm called on another audience member to help him lift a simple four-legged table, but instead it started floating as he started guiding it by using the tablecloth.

With no wires in sight, the trick was considered by many to be the best one of the show.

Camacho and Brandon Czworniak, a sophomore business administrator major, tried to figure out the secret to Reohm’s tricks.

“I’m interested in (magic) because I try to find out how they can do a trick,” Czworniak said.

Camacho and Czworniak admitted that despite their best efforts, they could not figure out how any of Reohm’s tricks worked.

Camacho also said Reohm’s act was a huge improvement over last year’s magician because she was entertained throughout the show.

Reohm mixed in comedy into his act as well, helping the audience stay engaged and on its toes.

One of the most comedic moments from his act was when he asked one audience member for a $100 bill.

Reohm gave the student a few different “prizes” he could win and he ultimately won a lemon.

He then cut open the lemon using a knife and surprised everyone, including the participant; the $100 bill was inside.

With a mixture of comedy and magic, the show was one of the highlights of Homecoming week.

Vega said that Homecoming is important because it helps bring a small school like La Verne closer together as a community.

Camacho and Czworniak also said Homecoming was a great way to show school pride, as she has seen many of her friends and classmates wearing ULV shirts in celebration of the week.

While the magic show was the first Homecoming event Camacho and Czworniak attended, they also acknowledged the week was very spirited and would make sure to be in attendance for other Homecoming events, such as the football game later in the week.