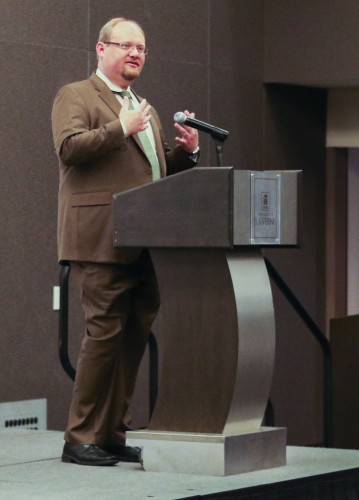 In remembrance of Kristallnacht, students, faculty and members of the Jewish community gathered at the Campus Center Ballroom Sunday to hear author James A. Grymes give an emotional presentation on his book, “Violins of Hope.” Grymes is not Jewish and had little knowledge of Jewish culture when he embarked on the journey of research, learning more about the role of violins in Jewish culture during and after the Holocaust. / photo by Gabriel De Alba

Author and Professor of Musicology at the University of North Carolina at Charlotte James Grymes gave a lecture on his book “Violins of Hope” Sunday in the Campus Center Ballroom.

“Violins of Hope” is a book about a collection of violins played by Jewish musicians during the Holocaust.

“There are two things I hope people take away from this book,” Grymes said. “One is the diversity of experiences during the Holocaust and the other thing is the importance of looking at individual stories.”

This event commemorated Kristallnacht, also known as the Night of Broken Glass.

“We wanted to do something in remembrance of this date, Nov. 9, 1938, when the Nazis went on a rampage on all Jewish communities, burning down synagogues, vandalizing businesses and killing dozens of Jews,” Ruth Slater, volunteer at the Jewish Federation of the Greater San Gabriel and Pomona Valley said.

During his lecture, Grymes showed short clips from documentaries focusing on the stories that each of the individuals from the documentary wanted to share with the world.

“The Holocaust isn’t one story of 6 million deaths, it’s 6 million different stories,” Grymes said. Grymes knew little to nothing of the Jewish faith.

He was inspired to do his research and write “Violins of Hope” after going to Israel in 2011.

While in Israel he visited a man who spent the majority of his life collecting and restoring violins from the Holocaust; this is where he made the decision to write his book.

It took Grymes approximately two and a half years to finish writing “Violins of Hope.”

“When you look at the Holocaust, the figures are just overwhelming,” Grymes said. “As humans, it’s hard for us to comprehend the large number of deaths that occurred. That is why I think that figures like Anne Frank are so important, because they help humanize the entire experience.”

In “Violins of Hope” Grymes talks about how, during the Holocaust, violins were not just mere instruments.

They represented something much bigger than that; they represented strength and optimism for the future. The lecture was a part of the Jewish Federation’s 17th annual book festival.

“This is our fifth year partnering with the Jewish Federation,” La Verne alumni relations manager Lucero Rojo said. “We began this partnership, because we saw it as a good opportunity to expand our lecture series and bring more diversity to the campus.”

The month of November is recognized as Jewish Book Month nationwide.

Jewish Book Month is dedicated to the celebration of Jewish books.

The federation has a long process for choosing which author to take on tour.

“We are part of the Jewish Book Council, and every spring they have a program of authors who agree to tour if they are chosen,” Slater said.

“The program will present us with approximately 250 authors and then we have to listen to two-minute presentation of their books,” Slater said.

Camila Rios can be reached at camila.riosgomez@laverne.edu.