By Gabriella Chikhani, Terrence Lewis on November 13, 2015 in News 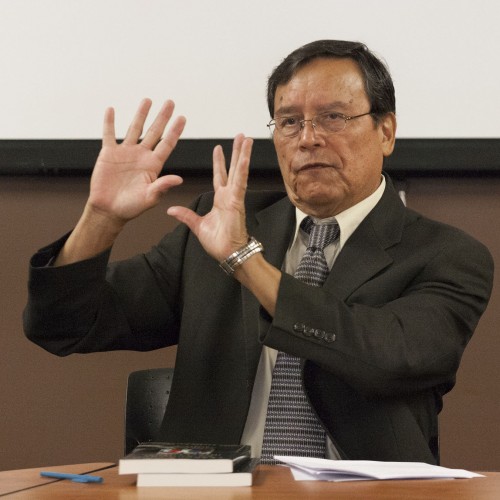 Pitzer College Professor Emeritus of Sociology and Chicano and Latino Studies José Calderón discusses the history of race in the city of Monterey Park in a packed house Tuesday in the President’s Dining Room. Calderon also discussed sections from his book, “Lessons from an Activist Intellectual.” Calderón also talked about his experience with Cesar Chavez, and his group, the Latino and Latina Roundtable of the Pomona Valley and San Gabriel Valley. / photo by Terrence Lewis

José Calderón, professor emeritus of sociology and Chicano and Latino studies at Pitzer College, brought faculty members to tears as he discussed his book, “Lessons From an Activist Intellectual: Teaching, Research, and Organizing for Social Change” Tuesday in the President’s Dining Room.

Students, faculty members and friends of Calderón filled the room as he told stories of being a young boy and working on the fields with his immigrant parents, helping students organize petitions and marches for bilingual education and being involved in the development of the Pomona Day Labor Center.

Calderón is involved with ethnic relations and urban community development, and he has made prominent contributions to the Chicano and Latino communities. He speaks about his work often at conferences.

“If you use your life to help others, you’ll look back at your life and think my life has been meaningful,” Calderón said. “If I got sick tomorrow, I could honestly say that my life had meaning.”

Calderón said his mission in life is to empower others to create a balanced, democratic society.

He has won more than 15 awards for his work including the Richard E. Cone Award for Excellence and Leadership in Cultivating Community Part­ner­ships in Higher Education, the United Farm Workers Union “Si Se Puede” Award, the Pomona Economic Opportunity Center Community Award and more.

In the beginning of his lecture, Calderón acknowledged his fellow activist and friend of more than 10 years, Alma Martinez, artist-in-residence at the University, and commended her for her global work in theater.

“I try to do plays that speak to our community and reflect back to the audience our own culture and reaffirms who they are, our individuality, Americanism, Latinoness and our search for equality,” Martinez said.

For the past 20 years, he has brought students to work with farmers, and on their last day, the students present theater performances to the farming community on what they learned.

“This book that I’ve written is focused and based on whether or not we can create a form of pedagogy that creates democratic classrooms and spaces for the community and if we can make real social changes,” Calderón said.

He is a founder of Urban, a national organization that works on urban research based networking with more than 2,700 members throughout the country.

“Unfortunately, we have found that in regards to academia, activist scholars are not as accepted or appreciated as traditional academics, so this network promotes this new pedagogy of community-based research in academics,” Calderón said.

Calderón believes education is the open door to fighting inequalities within society.

“Urban-enthused scholars like myself who have been touched by the social change bug see teaching, research and learning as more than a career but as a vocation for making social change,” Calderón said.

Abril Camarena, La Verne senior criminology major, met Calderón in 2014 when she started being involved with the Dolores Huerta Foundation. This foundation advocates change within the social justice system and is centered in Bakersfield.

“He talks about figuring out what you’re passionate about and for a long time, I was trying to discover that within my college career,” Camarena said.

“And now I’ve learned that like him, I’m very passionate about social justice and social issues. It takes time to find your passion, but once you do, you’re happier than ever,” she said.