By Celene Vargas, Nanor Zinzalian on November 20, 2015 in LV Life 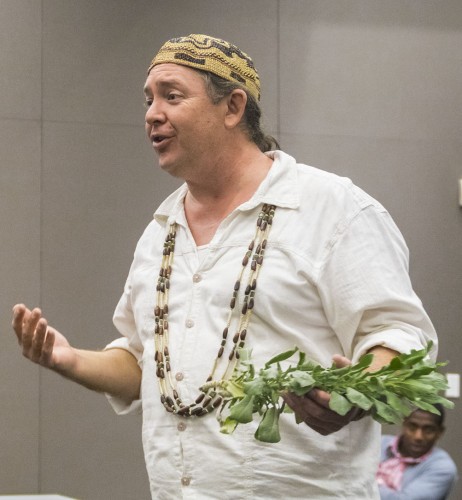 From the Native American Karuk tribe, storyteller Trevor Johnson tells listeners how important herbs are in his culture Tuesday in the Campus Center Ballroom. After describing the medicinal benefits of sage, participants were instructed to wrap the sage with yarn and use it to keep away harm. The event was sponsored by the Multicultural Club Council. / photo by Nanor Zinzalian

Native American storyteller Trevor Johnson spoke about a different way of seeing life by telling stories about the First People and the agreement between them and humans Monday in the Campus Center Ballroom.

Johnson told stories, sang songs and taught the audience of about 20 people how to bundle sage.

“It’s our duty to create a space for the groups that are not often represented, and I would say the Native American community is one of those,” said junior English major Melissa Martinez. She is also the vice president of programming for the MCC.

Johnson said he is Karuk, a tribe originating from northern California, and explained they believed their ancestors came from the ground.

He told the story of how Creator asked the First People if they wanted to give up their lives to help the humans. They agreed and chose to become different things like animals, rocks and plants.

“We believe these stones are our early ancestors,” Johnson said while holding up a stone from Mount Shasta. “These early ancestors know all of the stories about Creation, so we see things differently, my friends. My hope tonight is that, when we leave, maybe you have a little bit of that in your own mind, that things are different.”

Johnson explained there is an agreement between the First People and humans where humans use plants and animals for their benefit knowing one day, when they die, the humans will return the favor by nourishing the ground.

He said the Karuk believed it is important to remind the plants and animals of the agreement whenever he is going to use them.

Whenever Johnson gathers anything, he tells a medicine story in his mind to thank the First People for their humility.

“Being Mexican, we have an indigenous ancestry side, so recently I’ve started to get more into it, and I want to delve deeper into the culture,” freshman sociology major Jesus Sanchez said.

At the beginning of the event, Johnson had everyone sit in a circle around him. In the middle of the circle was an altar consisting of a mat with different types of plants that serve as medicine like sage, wormwood and bear root.

Throughout the night, Johnson purposefully moved clockwise around the mat.

“The circle reminds us of that power and of how we can’t get away from that connection,” he said in reference to the ancient agreement.

Johnson ended the night with a lesson in bundling sage to use as medicine while singing a prayer song. He then referenced the tragedy that happened in Paris.

“People’s lives were taken without the understanding of the sacredness of life,” Johnson said. “Saturday night, a stone was thrown into the water, and how are you and I going to react to that? Well, we can do the same thing, take some lives, but that’s not what we’ve been taught. We’ve been taught this is sacred, your life is sacred, even the lives of those we call enemies are sacred,” he said.