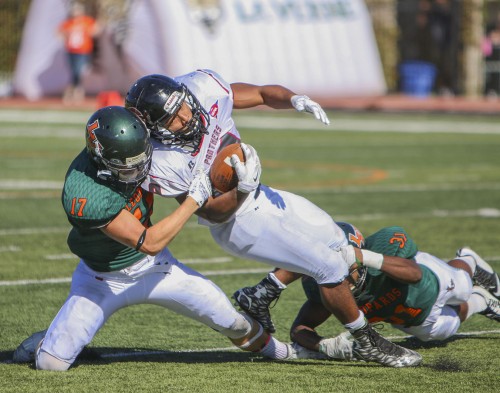 La Verne defensive backs freshman Brody Camping and junior An-tony Young take down Chapman senior running back Jeremiah McKibbins, preventing the Panthers from large yardage early in the game. Despite a rocky first half during the Halloween battle, the Leopards came back after halftime, and began dominating the field; offensively and defensively. La Verne scored three touchdowns in the third quarter and one in the fourth, to walk away with a 49-42 victory. / photo by Gabriel De Alba

The La Verne football team remained on top of the Southern California Intercollegiate Athletic Conference with a 49-42 win over Chapman, the defending SCIAC champions, Saturday at Ortmayer Stadium.

The Leopards are undefeated in SCIAC play with a 5-0 record and are 6-1 overall. The Leopards trailed, 28-14, in the second quarter, but then went on a 35-point scoring spree.

“To be the champs, you have to beat the champs,” senior running back Travis Sparks-Jackson said.

With 36 seconds left in the second quarter, Sparks-Jackson rushed for a 7-yard touchdown, ending the first half down, 28-21.

The Leopards began the second half with senior quarterback William Livingston running for a 6-yard touchdown, tying the game, 28-28.

With 8:53 on the clock, Livingston ran for another touchdown, as the Leopards took the lead, 35-28.

La Verne’s defense stepped up and was able to hold the Panthers for the rest of the third quarter.

Chapman sophomore quarterback Mac Vail was sacked by La Verne senior linebacker Anthony Penalber and the defense stopped a potential touchdown, as they held McKibbins at the 10-yard line on fourth and one.

The Leopards extended the lead, after junior running back Dallas Parent broke for a 90-yard touchdown run with 2:38 left in the third, 42-28.

The Panthers came close to finding the end zone, but could not capitalize on their opportunities, as they kept dropping the ball for incomplete passes.

Sparks-Jackson scored La Verne’s final touchdown with a rush of 46-yards with 11:51 left in the fourth quarter, pushing the lead to, 49-28. The Panthers then staged a comeback.

Senior running back Hakeem McGrew ran for a 57-yard touchdown and cut the Leopards’ lead, 49-35.

A 15-yard penalty for roughing the passer cost La Verne a Panthers touchdown.

The Leopards sealed the game when they recovered the kick, returned to the 18-yard line and ran down the game clock.

“We bend but we don’t break,” Parent said.

Parent also said that beating the defending champions gives the team more confidence and gets them one step closer to a conference championship.

“They (Chapman) came out strong and had a great plan for us at the beginning,” head coach Chris Krich said. “It took us a little bit of time to make adjustments and change a few things to counter what they were doing.”

The Panthers got on the board first by scoring on their first drive of the game. Senior running back Jeremiah McKibbins ran for an 8-yard touchdown and sophomore kicker Lucas Alfonso made the extra point.

The Panthers scored again before the end of the first with a 44-yard rush from McKibbins to put them up, 14-0.

Sparks-Jackson scored his first touchdown of the day, by rushing for 37 yards to start the second quarter and freshman kicker Eric Rembecky kicked for the extra point.

However, the Panthers answered back on the next drive with a touchdown run from McKibbins for 39-yards, making it 21-7.

Things got shaky when a high snap pushed the Leopards back eight yards.

With 3:43 left in the quarter McKibbins rushed for a 24-yard touchdown to give Chapman a 28-14 lead.

La Verne relied on its running game, with all seven touchdowns scored on rushing plays. The team rushed for 421 yards and passed for 111 yards.

The team is now shifting focus to next week’s game.

“We approach every game the same way. It’s a championship game every week,” defensive coordinator Oscar Rodriguez said. “Our focus is on Pomona and Pomona only and we’ll worry about the rest after that.”

The Leopards will play the Pomona-Pitzer Sagehens 1 p.m. Saturday at Merritt Field.