By Helen Arase, Jolene Nacapuy on November 21, 2015 in Football, Sports 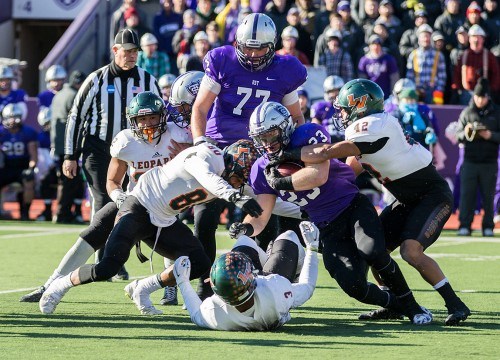 St. Thomas junior running back Jordan Roberts rushes for 9-yards before being taken down by La Verne junior cornerback Matt Nishanian and seniors linebacker Anthony Penalber and safety Carvante Hill in the first quarter of the game Saturday at O’Shaughnessy Stadium in St. Paul, Minnesota. / photo by Helen Arase

The La Verne football team’s playoff run was cut short, after a 57-14 loss Saturday against the No. 3 ranked University of St. Thomas in the first round of the NCAA Division III championships at O’Shaughnessy Stadium in St. Paul, Minnesota.

La Verne scored early in the third to cut their deficit to 21-7 before St. Thomas took control of the game completely. The Tommies led 21-0 in the first half and La Verne suffered minor set backs with injuries of its starting quarterback senior William Livingston and second-string quarterback junior Zachary Tomlinson.

The Tommies have now scored 30 points or more in 15 consecutive games.

This was La Verne’s first NCAA championship game since 1994.

“We were in uncharted territory going through the season and I credit our players for how well they did throughout the season to get us to this point, and coming off last season where were 2-7 to this point now, it seems more like a fairy tale than anything else,” La Verne head coach Chris Krich said. “Because we weren’t expecting a turnaround quite this fast and I credit our seniors, the players, because they really came together as a team, as a group and as a family and that’s just something that I was very happy about.”

The last time the Leopards traveled to Minnesota was in 1994, when they faced and were defeated by St. John’s, 51-12.

St. Thomas is also ranked No. 1 in the West in the NCAA Division III regional poll.

This was the sixth time in the last seven seasons the Tommies’ have secured a NCAA playoff berth.

“It’s a great feeling when you get to playoff time and it’s a different feeling for sure,” St. Thomas head coach Glenn Caruso said. “Hats off to the Leopards, who brought a really tough team and Minnesota really learned a lot about La Verne football in this last six days and I think there’s a lot of people that really didn’t care to hear ‘Well this isn’t a typical first round team because you’re sand bagging them’ and you’re not. This is a team that has made some unbelievable strides. You’re talking about a team that went from being 2-7 to getting the automatic qualifier in the national tournament and I think that’s pretty special and think they represented their school very well. But I’m proud of how we responded today and played.”

The Leopards also had to play in weather that they were not used to: a crisp and chilly 23 degrees Fahrenheit.

“When we stepped out for our walk through and all of them took their shirts off last night, it was a pretty interesting thing,” Krich said. Even coach (Jamar) Johnson was taking pictures of these crazy California guys running around in practice with their shirts off. But it was something we addressed. We knew coming in it wasn’t going to be the same. We left 80-degree weather to come here, but our guys are mentally tough and that’s what it takes to play in weather like this. I didn’t hear one complaint from any of our guys playing or saying anything negative about the weather. I just kept telling them, ‘This is great football weather.’”

Senior defensive back Anthony Penalber said that the cold weather did not play a big factor in the outcome of the game.

“Yeah, we felt it once we got off the plane, but once we got through walk-thrus and all that, guys taking their shirts off and stuff, the only thing affected were my hands and I think everybody else’s hands were a little cold, but other than that once we started warming up it was fine. It wasn’t too big of a factor,” Penalber said.

After a scoreless first quarter, the Tommies scored three touchdowns in the second.

After that, it was all St. Thomas.

Heading into the third quarter, La Verne had lost both Livingston and Tomlinson to injuries and had to rely on freshman quarterback Josh Evans.

“Our freshman Josh Evans stepped in and did a really nice job managing the game for us and with limited reps in practice,” Krich said. “And thank goodness he’s a good understudy and really took a lot of mental reps throughout the week to be able to manage us a little bit and be able to move the football. So that’s something we’re positive about and excited for in the future.”

“It’s obviously a situation where we had to change our game plan a little bit, but it had nothing to do with the outcome of the game.”

In the third quarter, La Verne got on the board. After consecutive rushes by Sparks-Jackson, Evans found junior wide receiver Ezra Broadus for a 10-yard touchdown with 9:03 left in the quarter. Leopards’ freshman kicker Eric Rembecky kicked the extra point to cut the Tommies’ lead to 21-7.

This was Evans’ first college game. He finished with 76 yards and a touchdown.

“Obviously you’re always a little nervous, but as the game goes on you get a good feel about it,” Evans said. “We moved the ball, but we could have played a little better.”

“They’re a tough defense,” he said. “They played well. I actually felt like I was getting swallowed up, but I felt like I could’ve done more, I just wish I could’ve, but they were in every hole every time and I just played hard, played my game, did what I could and all our O-Line guys kept working and adjust to their game, but they were on a relentless pursuit and did whatever they could to shut me down.”

St. Thomas quickly answered back with a 32-yard touchdown run by freshman running back Tucker Trestle and a two-point conversion run from senior tight end Charlie Dowdle for a 29-7 lead with 6:34 left in the third.

“They’re a good team and it’s a huge difference in our conference and one of the best teams I have ever played, personally and I give them my congrats.”

St. Thomas scored a total of 36 points in the third and fourth quarter.

Tommies senior wide receiver Jack Gilliland and fullback senior Dominic Trouccolo each rushed for a touchdown to extend the lead.

With 12:02 on the clock, Sparks-Jackson rushed in for an 8-yard touchdown and with the extra-point by Rembecky 30 seconds later cut the Tomcats deficit to 43-14.

Though again, the Tommies found a way to answer back with consecutive touchdowns to seal their victory.

The Leopards managed to keep the Tommies from scoring in the first quarter, which was rare for them.

“We were a bit rusty, but you have to give some merit to the other team,” Caruso said. “They did a really good job, they were very set on what they wanted to do in certain situations, probably showed more so than on film and that’s why that was probably an extra drive to figure out their plan.”

Despite the season being over for the Leopards, Sparks-Jackson says they have paved a way for next year’s team and hope they will be back.

“It’s a big difference from last year,” Sparks-Jackson said. “Big change, big culture change. That was our whole point in emphasis coming from the senior staff, just trying to change things from last year in La Verne. But we got to playoffs and expected to come out and win. No one wants to come into a game thinking they’re gonna lose, but came out here and gave it our all, tried our best, but as a season overall we got to still look at it as a positive.”

“We took every game as a championship game and one by one, we just kept winning and it was a good run and I’m just bummed it came to an end, but it was a good season.”

The Tommies move on to the second round of the playoffs and will face rival St. John’s.

Jolene Nacapuy can be reached at jolene.nacapuy@laverne.edu or on Twitter at @_jjolenenacapuy. 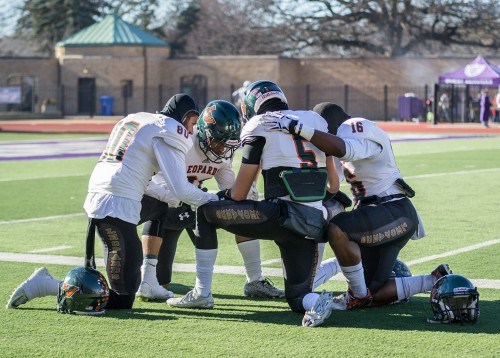 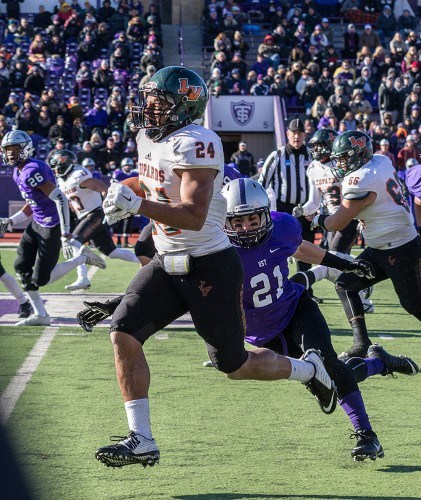 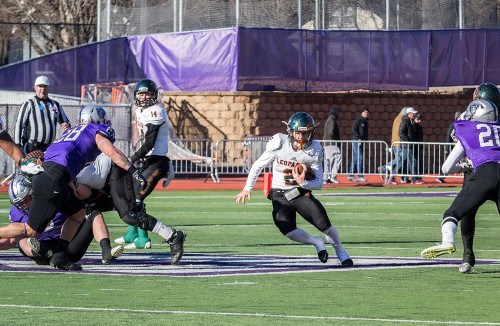 Leopards’ junior running back Dallas Parent advanced the ball for 2-yards before being taken down by Tommies’ sophomore linebacker Steve Harrell at the end of the second quarter. / photo by Helen Arase 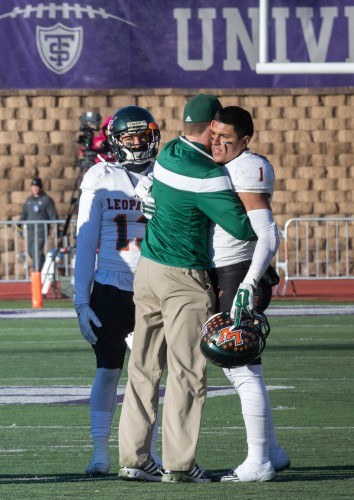 La Verne junior wide receiver Alex Arellano receives a hug from University of La Verne head coach Chris Krich after the game Saturday at O’Shaughnessy Stadium. The Leopards lost to the Tommies, 57-14, in the first round of the NCAA Division III championships. / photo by Helen Arase