By Daniel Torres, Jolene Nacapuy on November 20, 2015 in Football, Sports

The La Verne football team reigned supreme as it claimed the 2015 Southern California Intercol­legiate Athletic Con­ference championship Saturday with a 38-21 win over the Cal Lutheran Kingsmen at Ortmayer Stadium.

This is the Leopards’ first SCIAC title since 1995 and their first postseason tournament appearance since 1994. It is also La Verne’s first win over the Kingsmen since 2000.

“It still hasn’t sunk in yet,” head coach Chris Krich said. “It’s still kind of an unreal feeling right now and we knew we would be able to get here because we knew we were capable of doing that, but not a lot of people believed in us.”

“So being able to be in this position and to come away with a championship after where we’ve been, it’s just a really special feeling knowing we did it and made it this far.”

The team ended the regular season undefeated in SCIAC play with a record of 7-0 and 8-1 overall.

“It was a great game for us to be able to close out the regular season with a victory,” Krich said. “I mean really, we clinched the playoffs and to see our guys continue to battle and want to win is great. We were already tagged as sharing the title, but for our guys to take sole possession shows their character and their will to be successful and hope they carry that over later on down the road in life too.”

The Leopards will face No. 4 St. Thomas in the first round of the NCAA Division III National Championship tournament.

The undefeated Tomcats won the Min­nesota Intercollegiate Athletic Conference championship with an 8-0 record and 10-0 overall.

“We just gotta go in with a bang,” senior defensive back Carvonte Hill said. “It doesn’t matter who we play, we’re just gonna go in and play La Verne football. It has just been a great season. We had a hard time adjusting from last season. Coach Rodriguez came with a burst and just provided a spark. I remember the second day at camp he said, ‘Hey, put your ring size on your locker because we’re gonna win the SCIAC championship.’ In the beginning, everybody was like, ‘This guy’s crazy’ but he just kept repeating it and now look, we just did it.”

La Verne entered the second quarter Saturday down, 14-7. But the team managed to score 17 unanswered points in the second to take the lead, which they never gave up.

“I’m waiting for it to hit me right now just cause it took me three long years to get here and I’m just happy honestly,” senior tight end Bryan Okereke said. “Overall, we did a great job. We never stopped running, we never stopped believing and I’m just speechless right now.”

La Verne junior running back Dallas Parent ran in for a 1-yard touchdown and Rembecky converted the extra point.

“It feels great,” Livingston said. “We said it from the minute when the season ended last year that we’re gonna work our hardest to become the champs and it shows that hard work definitely pays off.”

In the third quarter, with less than five minutes to play Livingston’s pass intended for Arellano was intercepted by Cal Lutheran junior defensive back Logan Sanders at the 13-yard line.

That was the last time Cal Lutheran found the end zone. Seniors defensive lineman Michael Sheperd and linebacker Anthony Penalber each recorded a sack on Cal Lutheran’s final drive of the game.

In the last 10 seconds of the third quarter, La Verne senior running back Travis Sparks-Jackson ran the ball for 41 yards.

With that run, Sparks-Jackson became La Verne’s all-time leading rusher, surpassing Matthew Biggers, who set the record in 2013 with 2,844 yards.

Sparks-Jackson now has 2,891 rushing yards on the season.

“The last two years he has grown so much and I’m nothing but proud of all that he’s done for the program,” Krich said. “To have Travis break his record is pretty special and shows that he’s doing great things.”

The Leopards began the fourth quarter with a 7-yard touchdown run by Sparks-Jackson and the extra point to extend their lead. On Cal Lutheran’s next possession, Friederichse’s pass was intercepted by La Verne sophomore defensive back Eric Acosta, who returned it for 27 yards.

Sparks-Jackson then scored a 1-yard touchdown, putting La Verne up, 38-21. He ran for 159 rushing yards total in the game.

Livingston threw for 237 yards and two touchdowns. In the first quarter, he put La Verne on the board first with a 4-yard touchdown pass to Arellano.

Arellano had 18 receptions­­­ for 223 yards and two touchdowns. He was also named to the D3football.com Team of the Week.

The Kingsmen answered back in the first quarter with a 59-yard rushing touchdown by senior running back CJ Washington to tie the game, 7-7.

Cal Lutheran took the lead, as Washington ran in for a 31-yard touchdown, 14-7. La Verne fought back to take the lead and dethroned the Kingsmen.

Hill said the mentality heading into the game was to win the SCIAC championship and surprise those that did not believe they would make it this far.

“I’m gonna miss the fans that come and support and especially the brotherhood that we have on the team, but we’re not done yet. So whenever it ends, I’m gonna miss it a lot,” Canlas said. “We worked super hard in the offseason and the team that we have is a big family, like a big band of brothers and we believed in each other and we got the job done.”

The Leopards will kick off against St. Thomas at 10 a.m. Saturday at O’Shaughnessy Stadium in St. Paul, Minnesota.

LeoFM will cover the game live from Minnesota, beginning with a pregame show at 9:50 a.m. The broadcast can be heard on campus on 107.9 FM and online at leofm.streamon.fm.

“We’re gonna see some good competition compared to what we see in SCIAC,” Okereke said. “These are one of the best schools in the country so we’re gonna have to really work for this one.” 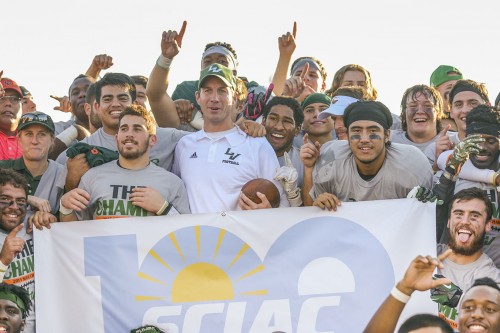 Head coach Chris Krich poses with his players and a SCIAC banner after the game. The Leopards move on to the first round of national playoffs, where they will face the St. Thomas Tomcats Saturday in St. Paul, Minnesota. / photo by Daniel Torres 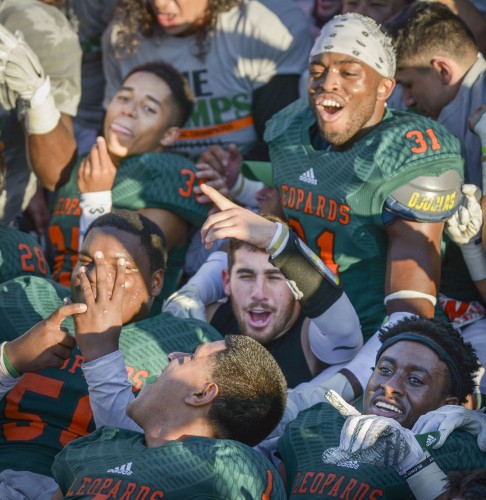 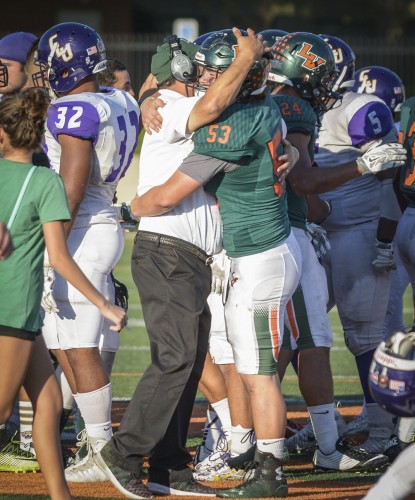 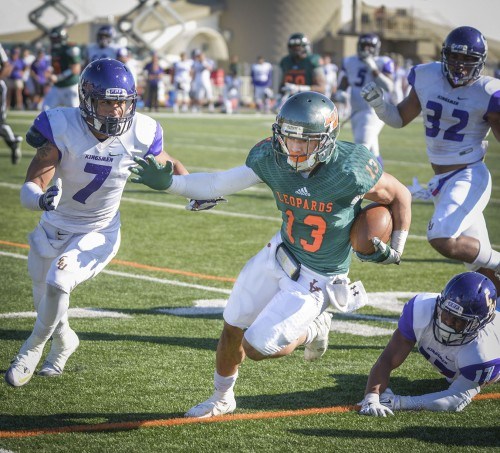 Leopards junior wide receiver Alex Arellano dodges a trio of Kingsmen defenders for an 11-yard completion from senior quarterback William Livingston during the first drive of the second quarter. This set up a touchdown by Livingston, which was called off on a holding penalty. The Leopards settled for a field goal, cutting the Kingsmen’s lead to 14-10. / photo by Daniel Torres