By Jolene Nacapuy, Kaila Williams on November 6, 2015 in Soccer, Sports 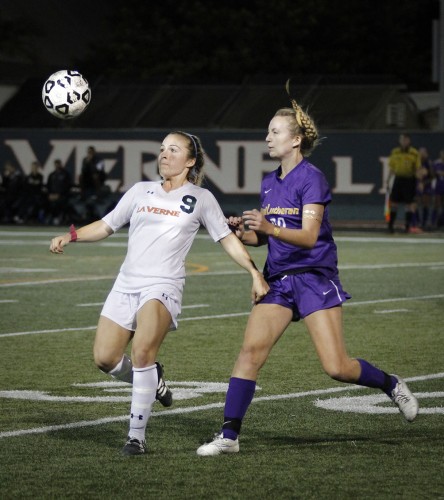 Cal Lutheran sophomore midfielder Kali Youngdahl attempts to steal the ball from La Verne senior midfielder Cassidy Schweiger in the first half of Saturday’s game at Ortmayer Stadium. The Leopards rallied in the last minute, but were stopped by the Regals defense. La Verne fell short, 2-1, on senior night, the last game of the season. / photo by Jolene Nacapuy

The women’s soccer team ended its season with a bittersweet 2-1 loss against the Cal Lutheran Regals on senior night Saturday at Ortmayer Stadium.

“I was really happy with how the way they approached (the game),” head coach Lauryn Pehanich said. “I thought they did a really good job with going in and continuing to play the type of soccer that I’ve been asking out of them all year long.”

Toneck scored her last goal as a Leopard in the 69th minute.

Chien took a corner kick and sent the ball to the far post and Toneck put it in the net with a header and cutting the Regals lead, 2-1.

“Whenever I go up for corner kicks, I’m always expecting and looking for the header and that was the perfect opportunity,” Toneck said.

The game turned physical after Toneck’s goal as the Leopards were pushing for an equalizer.

Chien was taken down in the 87th minute, but the referee did not issue a red card.

“That’s just how soccer goes, or any sport in general,” Duran said. “The refs aren’t always going to give you your calls.”

The Leopards were given a free kick from 25 yards out with a minute left in the half but could not capitalize.

The game started with both teams quickly pushing for scoring opportunities.

The Regals pressured the back line right away in the third minute, as senior midfielder Brittany Eremita took a shot from 20 yards out, but was blocked by Leopards freshman goalkeeper Jasmine Valadez.

The Leopards were awarded their first corner kick in the 22nd minute.

Chien took the kick, but was not able to connect with anyone in the box.

Junior forward Alexa Smith had a chance to put the Leopards on the board in the 23rd minute, but her shot was too high and went over the post.

Regals senior forward Bianca Deardorff scored on a one touch shot to the left post on an assist from senior forward Raquel Weckhurst in the 24th minute and put the Regals on the board first, 1-0.

The Leopards had a chance to equalize in the 31st minute, when they rushed toward the box, but could not find the back of the net.

Two yellow cards were issued in the 36th minute to Toneck and Weckhurst, after the two got into a spat when Toneck was pushed to the ground.

The Leopards started off the second half with two scoring opportunities.

In the 50th minute, Duran took a shot, but the ball was saved by Regals junior goalkeeper Coral Hasley.

Another close chance for La Verne came in the 51st minute when Chien took a corner kick and sent the ball across the front of the goal.

The cross was deflected by the Regals defenders.

The Regals added to their lead when freshman midfielder Jordan Miller scored off a corner kick from Weckhurst in the 54th minute.

Duran, Toneck and Varner all that they will miss the soccer family and had a great experience. Family and friends were in attendance in support.

“We started off really strong this year and then we kind of went through a little dip. Unfortunately when you only have a 20-game season that dip is detrimental,” Pehanich said. “For myself, as a coach, I’m looking at how can I get the girls to be able to be consistent on a game-to-game basis.”

The Leopards had seven shots with four shots on goal and five corner kicks.