By Campus Times Editorial Board, Jacob Bogdanoff on December 4, 2015 in Editorials, Opinions 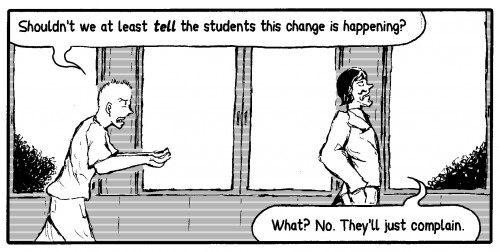 With the end of the semester approaching and registration taking place, chaos is commonplace. However, a registration restriction caused an unusual commotion for upperclass students Nov. 23, the first day of registration.

Dean of the College of Arts and Sciences Lawrence Potter authorized the registrar’s office to give underclass students priority to register for lower-division courses, forcing upperclass students to wait until Dec. 7. The restriction would have helped first- and second-year students enroll for the courses they need and help prevent the University’s retention rate from dropping.

While the decision may have been a good idea for maintaining retention rates and preventing first and second-year students from having insufficient course choices, it was not made with upperclass students in mind and was not properly communicated to the students.

Had the registration restriction been clearly announced earlier, the chaotic day could have been avoided.

Many upperclass students were not even aware of the situation until they were unable to register for the courses they had planned their entire schedule around. The dean notified faculty of the College of Arts and Sciences through an email around 5:30 p.m. on the Friday before registration. But news about the restriction never reached the students. Students should have been made aware so they could plan for adjustments.

Many academic advisers suggest their students start enrolling for major courses earlier and keep some of their general education classes for when they are juniors and seniors and have earlier registration times.

Having received this advice, juniors and seniors who were ready to register for the few classes they had left were infuriated to discover they had to wait until after the freshmen and sophomores.

The decision did give graduating seniors the ability to get the courses through an override, but it still failed to keep juniors in mind.

Juniors with lower-division classes left had the choice to either keep all of them until their graduating semester, so they could get the professors and class times they preferred, or take what was left on Dec. 7.

Although the decision was reversed, students remain confused as to why this situation happened in the first place, and if this will happen again in the future. Going forward, decisions that directly affect students need to be better communicated to them and should be discussed by other administrators before going into effect.