By Benjamin Camacho, Taylor Bolanos on December 4, 2015 in News 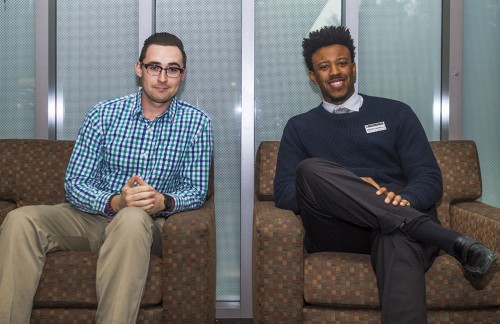 Each year brings new staff members to the University of La Verne campus. New additions to the office of undergraduate admission this fall are counselors Kyle Cazares and Jeremy McWells. Before coming to La Verne, Cazares graduated from the University of Redlands and McWells is an alumnus of ULV. The two will assist prospective students with the college process. / photo by Ben Camacho

As a 2013 La Verne graduate with a degree in sociology, McWells has come back to be part of La Verne’s MBA program and guide prospective students with their college applications.

“(La Verne has) always just been a place where I wanted to give back,” McWells said.

Between one to two classes each semester, office hours and traveling to high schools, wedding plans and purchasing a house with his fiancé, McWells balances many responsibilities.

McWells said his primary job as an admissions counselor consists of “talking to the students, getting them excited, and changing their view on college.”

McWells plans to stay in higher education after he gets his degree. He would like to teach, become a dean or maybe a university president one day.

“La Verne was the only place that was able to work with me, and I can use that experience for the student that doesn’t have it all together,” McWells said.

McWells said the most difficult part of his job is when he has to deny a student admission.

“I think it’s so easy to get attached to their story,” McWells said. “(You have to) make sure you help the next student.”

Although Kyle Cazares graduated in Spring from the University of Redlands with a degree in sociology, he has found

La Verne to be a campus reminiscent of his own college experience. He enjoys the small, welcoming community.

“This is my first step into the post-grad, adult world,” Cazares said.

Between working on a research paper of his own, finding his own apartment and helping high school seniors, Cazares faces more responsibilities than before.

Luckily, he said his co-workers have all helped him with his first admission season at La Verne.

Cazares is not new to the admissions field; He worked in the Redlands admission office for three years as a student.

“It was intimidating at first, but I think I’m getting used to it,” Cazares said. “(My co-workers) helped me find my sea-legs.”

In the future, Cazares would like to get his masters in sociology and teach higher education.

“They have high energy; they fit in really well,” Ramirez said.

Ramirez said McWells is relaxed and “on top of his game,” and Cazares “already knows what he’s doing.”

Ramirez is positive about the work that McWells and Cazares will do for the University.

Happenings
Admins must notify students, too