By Kaila Williams, Noel Cabrera on December 4, 2015 in News 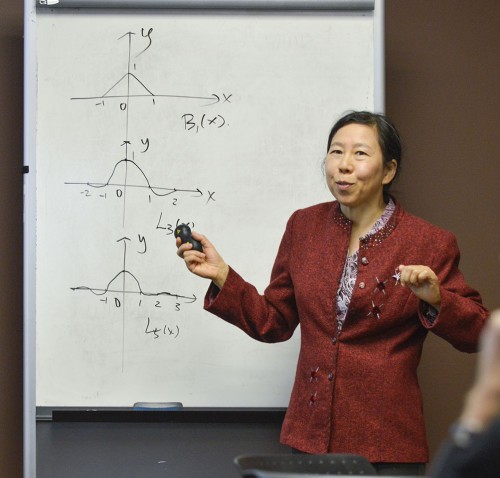 It was an afternoon of integral equations and cardinal splines as Professor of Mathematics Xiaoyan Liu presented her sabbatical research Tuesday in the President’s Dining Room.

Liu went on sabbatical during the fall 2014 semester and wrote research papers regarding Fredholm and Volterra integral equations, Bézier curves, and the EH interpolation spline.

Liu began the lecture by explaining the approximation theory and spline functions, which were the basis of her research papers.

“Approximation theory is the research of how to use simpler functions … to approximate complicated or unknown functions,” Liu said.

Liu used the example of a company that wants to predict profit numbers in five years. To find that unknown number, you would use the approximation theory to estimate the profit.

Liu went on to explain that spline functions are piece-wised functions, meaning that they are made up of pieces to make one whole function. There are different kinds of splines functions like polynomial splines, trigonometric splines, exponential splines and more.

One research paper, “Numerical Methods for Solving Systems of Fredholm Integral Equations with Cardinal Splines,” was presented at the International Conference on Nonlinear Problems in Aviation and Aerospace World Congress conference in Narvik, Norway. The focus of this research paper was to find alternative methods for solving systems of integral equations.

Liu drew graphs and lines on a whiteboard to further give explanations of the research to the audience.

“It was interesting when she explained splines and gave an example of the spline function she was using,” said Sasha Webb, senior math major. “I liked that she gave the history behind the function as well.”

Liu presented another paper, “Row Convergence of Padé Approximation,” at Mahidol University in Thailand, which took a look at French mathematician Henri Padé’s Padé table. This paper was published in the journal Methods and Applications of Analysis.

Along with the research, Liu shared photos of her trips to Norway and Thailand for the conferences.

“As a student, I often find myself thinking that the only thing professors do is teach, when in reality, most of their time is taken up doing research and attending conferences,” Gutierrez said.

“A Kind of QT – Bézier Curves and its Applications,” another one of Liu’s papers, focused on Bézier curves with two shape parameters that can be altered by changing the values of the parameters.

This was similar to the previous paper she worked on.

“It isn’t often that we see people from the math department giving these lectures so it was cool to see one given,” Webb said.

Liu has 26 papers published in various mathematics journals. Two collaborated papers have been submitted for publication and Liu has more research papers in progress.