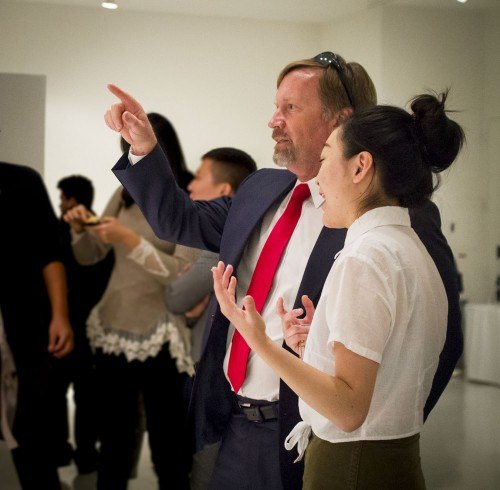 Provost Jonathan Reed asks senior Xinjie Yin about the process behind her artwork featured in the Senior Art Exhibit Dec. 1 in the Harris Gallery. Yin’s piece features two intricate female figures bordered by geometric shapes all done in red on a clear Plexiglas background. Other student artwork included a honeycomb sculpture and a collage shaped like a triangle. / photo by Benjamin Camacho

They worked all semester with Ruth Trotter, professor of art, who advised them.

“We see this as a bridge between being a student and being a professional artist and you know that their growth is meaningful,” Trotter said.

The seniors each chose an idea that is meaningful to them and built a project based on that idea.

A few themes the artists dealt with include sexuality, homelessness, American culture and environmental issues.

“For the senior project, you see their techniques and realize that it is not baby steps anymore,” Trotter said.

Peacock’s work focused on his sexuality. The piece consisted of black and white images assembled into a triangle. Each photo had pink accents and a hot pink triangle framed the photographs.

“It is meant to be a celebration of my new life now that I came out,” Peacock said. “If you look into the pictures it is a lot of stuff a lot of gay men are ashamed of, like their voice, crying or masculinity in general.”

The triangle that frames the images symbolizes unity and coming together.

“The piece took me three weeks to do, but the idea developed in six weeks,” Peacock said.

“It was difficult to come, but through class critiques I was able to figure out what I wanted to get across.”

Peacock’s piece originally was going to be a painting, but with critique from Trotter and the students he decided to change it to photographs.

He also originally did not want to pose in his own photos, however his class thought he would be the best to portray his message.

De Alba exhibited a sculpture that was a replica of honeycombs with hexagonal cells. The theme of her piece was the mass decrease in the bee population.

The piece showed her respect for the bee’s existence even though she fears them.

Another piece at the exhibition was an ode to Chinese culture made by Yin. Being an international student living in a new culture is what inspired her.

She brought Chinese elements into her work, which was a Plexiglas with red designs on it.

“The gallery is beautiful, breathtaking and unique,” junior psychology and international studies major Shaiasia Wannamaker said. “I really like Jordan Nesbit’s sculpture. I’m entranced by it, and I cannot figure out the symbolism about it. It reminds me of spirituality or trying to reach a holy spiritual level.”

Nesbit’s piece was a yellow pyramid sculpture with a small statue of David at the peak and small Legos at the bottom trying to make their way to the top.

“Each student started with an idea that eventually evolved into something different,” Trotter said.

“They ultimately chose topics that are deep but as a rule we ask them to examine what they have learned about being an artist over their four years and express that.”