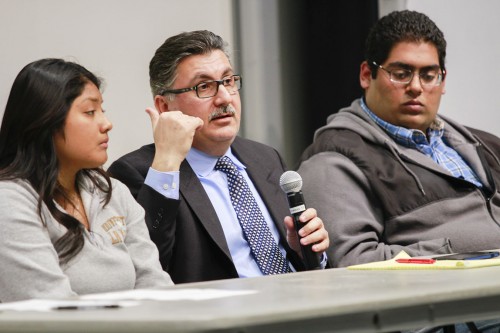 In light of the current debates around immigration and Islamophobia, the University of La Verne community aimed to acknowledge and reflect on the similar trends of discrimination experienced by different minority groups in a discussion panel “Different Faces, Same Fears” Feb. 19 in LaFetra Hall.

The panel, co-sponsored by the Office of Religious and Spiritual Life and the psychology department, landed on the 74th anniversary of Executive Order 9066, an order issued and signed by Franklin D. Roosevelt that forced all Japanese-Americans into internment camps in the United States.

“This spotlight of hatred is constantly moving from one group to another,” alumna Layla Naji said. “In 2016, when we look at each other, all we see is how we are different. At our core, we are connected in a lot more ways than we are different.”

All five panelists shared their insight and personal stories of racial, religious, ethnic or cultural discrimination.

“We need forums to talk about these issues so we can have good critical conversations to have difficult conversations, to support one another, to figure out how we can make changes together,” said University Chaplain Zandra Wagoner, who moderated the panel.

Panelists were shown and reacted to a video of Republican presidential candidate Donald Trump calling Mexican immigrants “rapists” and “killers” and were not the “best people” to inhabit the United States.

“There are a lot of individuals that come here from Honduras, El Salvador, Puerto Rico, all of these other countries in South America.”

Hernandez, whose father was deported back to Mexico, said she has to live with the pain of that separation.

Hernandez said she believes Trump’s statement has no connection to true Mexican heritage.

Panelist Tahil Sharma, an alumnus, recounted the 2012 Oak Creek massacre, where a white supremacist walked into a Sikh temple in Washington and fatally shot six people.

“My safe space, my temple, my place to pray and find solace was desecrated,” said Sharma, who is Sikh and Hindu. “It was not safe anymore. I could not pray there without a sense of concern that someone might go in and do something again.”

Though all panelists each had different racial, ethnic and cultural backgrounds, they each shared similar stories of discrimination.

Alumna and panelist Layla Naji, a mother of two children, said she gets startled looks by strangers in public because she wears a hijab.

Professor of Psychology Nadine Nakamura shared a letter from her grandfather, who described the persecution his Japanese family went through.

Taif Kaissi, an Iraqi and Muslim man, said that shortly after 9/11, he received countless harassment calls and his house was broken into and vandalized.

“Everybody has the same color of blood. We are all humans,” said Kaissi, who is the vice president and executive director of MiNDS, or Medical Network Devoted to Service, a nonprofit and mental health service for the Muslim community.

“I think it brings awareness, and it informs people to bring change,” Ayala said. “To not let things continue going the way they always have been going.”