By Giovanna Z. Rinaldo, Kathleen Arellano on February 26, 2016 in News 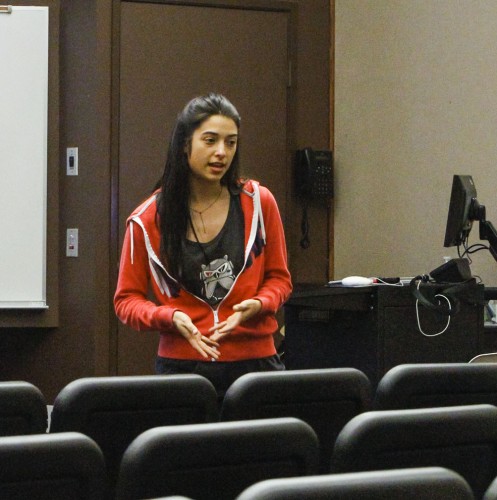 Junior political science major Mariela Martinez, president of the College Democrats club, leads a discussion after a screening of “Salam Neighbor” Feb. 18 in the ACB. The documentary follows a group of men staying in Za’atari, a refugee camp. The filmmakers experienced first hand the living conditions of the Syrian refugees who are escaping the civil war and ISIS attacks. / photo by Kathleen Arellano

Students were able to have a deeper understanding of the situation Syrian refugees face with a screening of “Salam Neighbor,” a documentary that explores the human side of an ongoing political conflict, Feb. 18 in the Arts and Communications Building.

“With all the talk that has been going on with Syrian refugees, and (people) not knowing enough about them, we definitely want to raise more awareness on campus about the issue,” said Mariela Martinez, College Democrats president and junior political science major.

Ingrasci and Temple were the first filmmakers allowed by the United Nations to stay at the camp.

Upon their arrival, Ingrasci and Temple learned the small camp had no place for special treatment. They were given the same treatment as the refugees.

Ingrasci and Temple met many refugees who had to survive in a war they did not choose to fight and told their stories with their film.

Ghassem is one of many Syrian refugees who did not freely choose to leave but was forced.

Ten-year-old Ra’ouf used to look forward to coming to school that he would arrive to class early. Now he cannot even continue his education because of the trauma he experienced through the war.

The filmmakers also met Um Ali, a woman who lost her two sons to the war and now finds solace in writing daily journal entries on her tent’s walls.

International student Majd Masoud said there are several surprising and saddening stories in the documentary, from fatal tragedies to the lack of motivation children face to attend school again.

“They showed me the reality of the way the camps (are) over there,” Masoud said. “It’s kind of a scary situation.”

One of the main messages of the film is to be understanding and compassionate toward the refugees, said Jesus Orellana, junior creative writing and political science major.

“(The situation) is not in your control, you just want to seek safety so you just hope that someone accepts you and empathizes with you,” Orellana said.

The film portrays the hardships and struggles many Syrians face while triggering one raw, central emotion: empathy.

“We are all neighbors, we are all human beings,” Martinez said. “We kind of all share common struggles, joys and sadness, and I think we just need to recognize that and learn to live together.”

“I think these kinds of events bring people together around that whole idea that we are all humans,” Orellana said. “Let’s help each other out, make each other better.”

The documentary is produced by Living on One, a studio whose mission is to create educational films to raise awareness about important global issues including hunger and poverty in third world countries.

“Salam Neighbor” is available for rent in the Wilson Library.