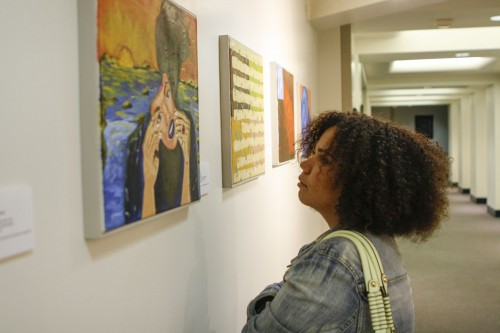 Upland resident Amanda English observes the artwork from the “Incarceration Realities: Walls and Beyond” exhibit in the University of La Verne College of Law in Ontario. The show features artwork about the prison system from both outsiders and prisoners. The exhibit will run through May 16. / photo by Terrence Lewis

The exhibition “Incarcera­tion Realities: Walls and Beyond” at the University of La Verne College of Law campus gallery in Ontario, is creating a dialogue about mass incarceration in the United States through inmate artwork.

“My attitude about my situation, it strikes some as weird. After all, I’m serving life without parole and have done so now going on 21 years,” reads a piece titled “Metaphorical Self-Portrait” by John Winkleman, an inmate at Richard J. Donovan Correctional Facility in San Diego.

The portrait is on a black canvas with the white outline of a head with an ear where the words are written in red ink, surrounded by musical notes and titled K-57302.

Winkleman’s artwork is among many different pieces. One portrays a blue woman on an orange canvas and another depicts a black figure removing their face like a mask.

A painted collage of warm colors such as brown, orange and green, represents rows of plants in the shape of the American flag.

“Blue Woman, Orange Back and Leaves” and “Stripes Flag” were submitted anonymously and on loan through the Prison Education Project.

Gilbert Holmes, dean of the College of Law, began the tradition of the art gallery when he became the dean in 2013.

Holmes said that the main purpose of “Incarceration Realities” is to spark discussion about mass incarceration and bring attention to an issue that is very important but not always given the attention it deserves.

“The mass incarceration challenge is twofold,” Holmes said. “Firstly, how many people are we putting in prison, in general, compared to other societies? And then secondly, what is mass incarceration doing to the black and brown community in the U.S.?”

“Slave Auction,” a piece done in ink by artist David Earl Williams, depicts a smiling auctioneer and an enslaved black man in chains.

“What we tend to do with people who commit crimes is we dehumanize them,” Holmes said.

The gallery features inmate artwork as well as informational pieces that highlight problems in America’s prison system. A mural of $100 bills that have historical facts written in red, accounting for the faults of the system helps to highlight those problems.

“Over 4 million, mostly poor, U.S. citizens have lost their right to vote due to felony convictions, including 13 percent of all African-American men,” reads one of the $100 bills hanging on the gallery’s wall.

The gallery’s curator, Conchi Sanford, said the art relates to what has been happening in the prison system ever since the three strikes law was put into play.

“It is informative and it represents a dialogue that normally people on the outside would not have unless they were confronted with the harsh realities of one of their friends or family members going to jail,” Sanford said.

The $100 bill mural has a panel that asks “Who Profits?” and goes on to explain that, “The U.S. ‘Corrections Industry’ now employs more people than General Motors, Ford, and Wal-Mart combined.”

The Corrections Industry has become a multi-billion dollar industry, according to the mural.

“The artwork that comes out of the program has worked as a rehabilitation tool for these inmates, when they don’t have anything,” Sanford said.

“It gives them hope and something to look forward to every day.”

Tom Skelly, regional coordinator of Arts in Corrections and mentor and trainer at the California Rehabilitation Center, provided some of the artwork on loan through the Prison Education Program and has been working with prisoners through the program for 30 years.

“I think it is important for the general public to be educated on life in prison and fight the stereotype that everyone in prison is a loser,” Skelly said.

Organizations like the Prison Education Program use art as a means of communication between those incarcerated and the rest of society but also as a means of rehabilitation.

“Programs are not pampering them. It is just creating a more positive experience,” Skelly said.
“When they become our neighbors we want them to be better not worse.”

Skelly said that although the Prison Education Project and the “Incarceration Realities” gallery are great projects, they are only operating at 50 percent capacity.

Since the Arts and Corrections Program was cut in 2010, the position of the institution artist facilitator was also cut, a position Skelly said, that was a full time job communicating between the inmates and the community and the outreach programs such as the Prison Education Project.

“A lot of the programs are being sabotaged and derailed because there is no person there,” Skelly said. “The arts humanize people, and we need that more than ever these days.

Kendra Craighead can be contacted at kendra.craighead@laverne.edu.