By Jerri White, Jose Brambila on March 4, 2016 in Sports, Tennis 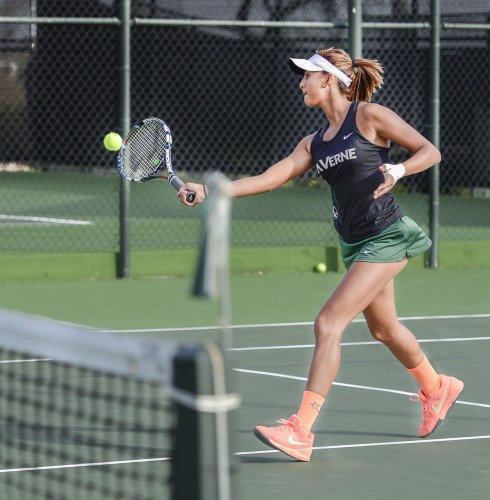 La Verne junior Areli Martinez lost in her singles match to Christopher Newport sophomore Claire Dockdrill, 7-2, Sunday at the Claremont Club. The Leopards won only two singles matches and were bested by the Captains, 7-2. / photo by Jerri White

The No. 23 La Verne women’s tennis team fell in a match to the Christopher Newport Captains, 7-2, Sunday at the Claremont Club.

With the season off to a rocky start, junior Bridget Etchegaray said some of their goals this season includes improvement on all aspects.

“We just need to keep working and staying leveled throughout the match,” Etchegaray said.

In the doubles match, the Captains swept the Leopards. Etchegaray and freshman Savanah Goode lost, 8-2 to sophomore McKinney Harwood and junior Katie Carlson.

For Goode, this defeat was a learning experience in the collegiate level and enjoys the intensity.

“This experience is very different and more intense, nothing like high school, where it was laid back.” Goode said.

The sweep was finalized when La Verne freshman Savannah Fisher and sophomore Madison Madewell were bested 8-3 by sophomores Isabelle Wessel and Kate Huck.

La Verne headed into singles play, down 3-0. Etchegaray, Madewell, Fisher and junior Areli Martinez all came up short to the Eagles.

Goode and Chinn were the only Leopards to earn a win in their singles match.

Despite the tough losses, head coach Yolanda Duron has a lot of faith in her team.

“Our end result goals are top 40 in the country and top 5 in the conference,” Duron said. “Also to be an all-academic team and to enjoy the process and improvements during the season.”

La Verne faced No. 19 Mary Washington Wednesday at the Claremont Club, and were swept, 9-0.

The doubles sweep was completed after Truijillo and Chinn fell in their doubles match, 8-3, to senior Mackenzie Smith and junior Taylor Diffley.

In the singles matches, Etchegaray, Chinn and Goode were the only Leopards’ who managed to get to three sets, but could not secure the win.

The Leopards drop to 3-5 overall and 1-0 in Southern California Intercollegiate Athletic Conference play.

La Verne will be back in action in non-conference play against Texas-Tyler 2 p.m. March 11 at the Claremont Club.