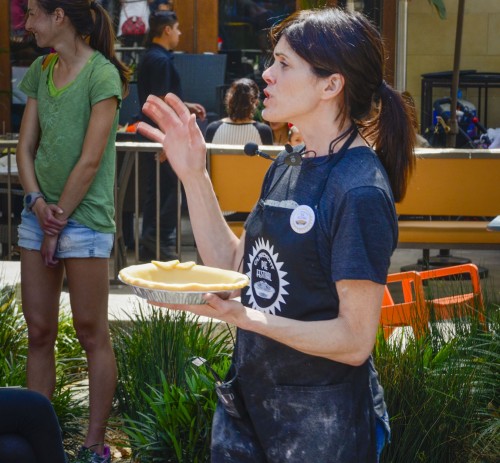 Annika Corbin, owner of I Like Pie and creator of the Claremont Pie Festival, demonstrates how to make the perfect pie crust during the annual event Saturday in the Claremont Village. Bakers showed off their homemade pies and competed in a pie baking contest. The festival also featured classic cars and motorcycles at its first car show / photo by Katelyn Keeling

Second Street was shut down for vendors, food trucks and patrons Saturday for the fourth annual Claremont Pie festival in the middle of the Claremont Village.

The small, shaded plaza in front of the I Like Pie Bakery was full of people watching live DIY pie workshops and coffee brewing demonstrations.

A live band, a food truck, an information booth with schedules and maps, and tables selling organic produce lined Second Street, drawing in passersby and lunch-goers.

I Like Pie gave free samples at the door and had two separate booths, one in the main plaza and one on Second Street.

The staff was stationed in the bakery and at both booths, making their presence known throughout the festival by selling pre-packaged pies and promoting the bakery.

Heidi Coduto, the bakery supervisor, said that the pie festival gets bigger every year.

“Everything is fresh, everything is hand-made, a lot of work goes into the pies,” Coduto said. “It is as if your mom made it.”

The different flavors packed into the cupcake sized pies ranged from chocolate, apple, cherry, or blueberry and were sold for $5 each.

“The pies are expensive, I’m not going to lie,” Coduto said. “But we are still, always, very busy and I think it is because people know that it is really good quality.”

More than 100 people came through the plaza, and at least half of them stopped to get a pie and watch the demonstrations with their families.

“There is nothing artificial in them, no preservatives, just corn starch and sugar and that’s it,” Coduto said. “The bakers get here at 5 a.m. every single day.”

I Like Pie opened in November 2011, and the first pie festival was held in August 2012.

“The idea for the festival was something I had envisioned before I had even opened up the shop,” owner Annika Corbin said.

She said this year’s pie festival drew in more than 6,000 people.

“Pie had never been tackled from an entrepreneur standpoint, even though it is a much more traditional American dessert,” Corbin said.

The idea of making, small, stand-alone cupcake-style pies came to Corbin gradually, as she noticed that cupcakes’ popularity came from their portability.

Corbin said she wanted her pies to be easy, portable and unique.

Employee Christine Zabalza said I Like Pie’s cupcake styled-pies are really popular at events such as weddings and bridal showers.

“Honestly they are so in right now, a lot of people come in from catering businesses and they use them at their events,” Zabalza said. “Each one is their own type of pie, not like a cupcake.”

A dozen cupcakes from one batter would all taste the same, but a dozen miniature pies could each be their own special flavor, branding the uniqueness I Like Pie has to offer.

“A lot of hard work goes in to making the pies,” Zabalza said. “The recipes are so unique and individual, and I think that is what draws people to the festival.”

Zabalza said Last Drop Café and Augie’s Coffee helped put on the festival’s DIY demonstrations featuring their own products as well as I Like Pie’s customer favorite flavors, which includes the seasonal apple and sweet chocolate.

The demonstrations were a collaboration between I Like Pie and their neighbors in business from within the plaza shops.

Augie’s coffee staff shared a DIY coffee brew that they claimed would go great with a piece of pie.

“Maybe it is a little too expensive at the moment, but the pies are still great,” Zabalza said.

Corbin said that I Like Pie might be expanding to a Pasadena location, but that she will know more about this possibility come early November.