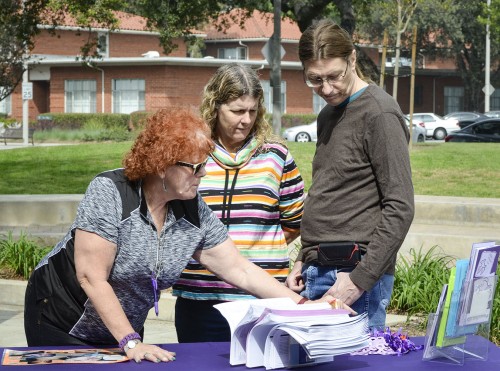 The University of La Verne club Voices for Hope hosted a Take Back The Night event in support of victims who have been hurt by sexual violence, March 3 in Sneaky Park and the Campus Center.

Take Back The Night is a decades-old event created to raise awareness of sexual violence.

The event was coordinated by sophomore psychology major and survivor Jedaun Carter, who hopes help other survivors of sexual violence.

“I’m so happy that people attended because we can’t end rape culture and sex slavery without the help of caring people,” Carter said.

She also spoke about her past and how she survived sexual assault and sex trafficking.

“Since sharing my story I feel like I can finally start to heal,” Carter said.

The event happened at two sites on Campus.

The first part was held in the morning at Sneaky Park and introduced the event’s origins and featured speakers who spoke about sexual assault and their experiences.

The event featured an activity in which people wrote on paper something they wanted to let go of – such as trauma, anger or a personal struggle – and tied it to a balloon then released it up into the sky.

Junior English major Melissa Martinez spoke about her personal experience being sexually assaulted and how it affected her.

“It made me feel like I could change the world and rape culture,” Carter said about Martinez’s story.

The second part of Take Back The Night was held in the Campus Center and consisted of more speakers, including ULV alumnus and Universal Studios Hollywood performer Cole Edward.

Edward spoke about how he was sexually assaulted.

“I knew that other people had to know, Edwards said.

“I realized that these sexual predators rely on silence to continue their exploitative actions. After revealing it, it made me feel free.”

Edward noted that just because he is a man, and that sexual abuse vis much more common among women, does not mean men should feel ashamed or be silent about it.

According to the National Sexual Violence Resource Center, one in five college women and one in 71 college men can expect to be sexually assaulted during college years.

House of Ruth did a presentation explaining what domestic violence is and what to look for if someone thinks he or she or a friend is being abused in some way.

“This type of information is beneficial to everybody because the more knowledge you know, the better chance you have to stop it,” said Voices for Hope president and junior business administration major Alexis Coria. “I can inspire others and I feel so liberated.”

“To those who are going through sexual violence, don’t let anyone tell you that you deserve it and you’re not worthy,” Carter said. “Say something and stay strong. Always remember it wasn’t your fault and you survived and that’s all that matters,” she added.

Students up all night to get ‘Lucky’
Your vote matters