By Campus Times Editorial Board, Jacob Bogdanoff on March 4, 2016 in Editorials, Opinions 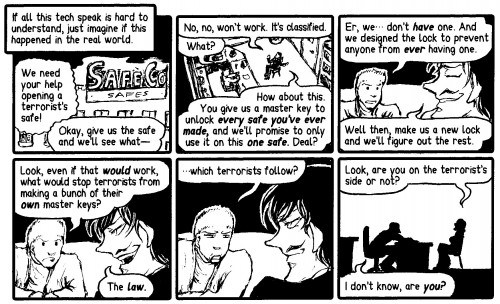 It would be outrageous if a federal law enforcement agency asked a lock maker to create a master key that would open the locks to millions of homes, and give that key to the agency.

Invasion of privacy would be constant concern, and people would wonder if they were being watched, and if their belongings were safe.

This is basically what is happening now, or at least what the FBI is asking Apple to do with the iPhone 5C of Syed Rizwan Farook, one of the San Bernardino shooters responsible for the Dec. 2 terrorist attack that killed 14 people and seriously wounded 22.

The FBI has asked Apple to build a new version of the iPhone operating system to bypass the security features of the phone.

Apple has complied with the FBI’s requests to provide assistance in unlocking the iPhone, but the company is also unable to unlock it.

The case is causing much debate in the country, because it is more than just unlocking one phone – this case is about setting a legal precedent.

In a Feb. 16 letter titled, “A Message to Our Customers,” Apple Chief Executive Officer Tim Cook wrote that customers’ personal information on the iPhone is important, and in order to keep the data protected from hackers and criminals, only the user has access to the data. “In the wrong hands, this software — which does not exist today — would have the potential to unlock any iPhone in someone’s physical possession,” the letter reads.

Although the government said it would only unlock this specific iPhone, Apple said there is no guarantee the new tool will only be used once, calling it “a dangerous precedent.”

Apple is currently also facing similar cases with at least a dozen more iPhones in which the FBI is requesting that Apple to unlock them.

In attempts to force Apple to create a backdoor to the iPhone, FBI used a federal court order and the All Writs Act, a 227-year-old federal statute.

However, Apple won a New York drug case on Monday, and the ruling stated the government does not have the right to use the All Writs Act to demand Apple to unlock a device.

This case can serve as a precedent to similar cases, including the high profile case of the San Bernardino shooter’s iPhone 5C.

Many Americans are supportive with Apple’s decision in refusing to unlock the iPhone 5C for the FBI. There were also protests outside the Apple headquarters and the FBI headquarters with people showing support for Apple.

Many laws in this country were written before cell phones even existed. However, electronic privacy should not be taken lightly, and as consumers of electronic devices, we should not tolerate government over reach – even during scary these times.