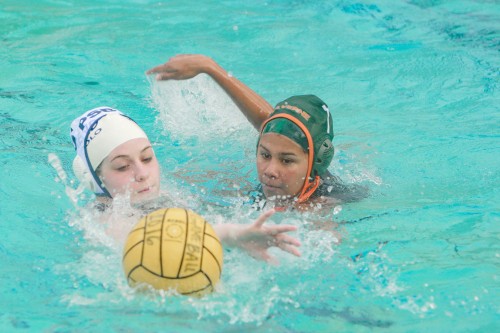 “It felt great to beat CMS, which is something that hasn’t been done in the four years I’ve been here,” senior center Catie Tuning said. “It was a great feeling to see our team working together to grab our first conference win. Hopefully this win sets a good tone for the rest of our season and we can keep up the good energy moving into the weekend and beyond.”

Both teams kept the game close with no team leading more than three goals.

La Verne senior driver Katie Stelnicki shot potentially the game winning goal with 48 seconds left in the fourth quarter to seal the victory for the Leopards.

“That last goal was extremely crucial,” Stelnicki said. “I knew we needed one more goal, and when the ball was turned over, three of us rushed in on the net, and we were able to capitalize on their mistake.”

The team continued to stay undefeated at home, after defeating Penn State Behrend, 18-4, Monday at the La Verne Aquatics Center.

The Leopards are 8-2 overall and 1-0 in SCIAC, their best start in the last 10 seasons.

“This season so far is really fun. We have a lot of new people and so it feels like a fresh start,” Tuning said. “We also have a great team mindset and work hard everyday to get better as the season moves along.”

La Verne got on the board quickly in the first quarter against Penn State Behrend, on a goal by Tuning with 7:34 on the clock.

The Leopards added two more goals right after to take a 3-0 lead.

Sophomore utility Maryn Horn put the Lions on the board with less than three minutes to go in the quarter.

In the second quarter, the Leopards stayed hot, and scored the first three goals. Junior center Megan Little started the scoring with 5:23 on the clock.

Then, with a 6-on-5 power play opportunity, Randall and Tuning followed with back-to-back-goals to put the Leopards up, 8-1.

Though that would be the last goal of the first half for the Lions, as the Leopards continued to score, putting in two more goals in the last minute of the half.

Heading into the second half up, 10-2, the Leopards kept up their momentum.

Zuniga and Randall each scored within the first two minutes of the third quarter. The duo finished the game with two goals a piece.

The Leopards drew another 6-on-5 opportunity, and sophomore utility Lauren Lancaster scored a goal, 13-2.

The Lions found some momentum with back-to-back goals by junior utility Brittany Pinter and senior driver Mary Causgrove to end the third.

“Right now one of our biggest struggles is following through with our counter attack goals,” Randall said. “We have the ability to force the turnovers, we just have to work on our following through.”

The Leopards took control and dominated the fourth quarter, as they shut out the Lions and scored five goals, who seemed to not be able to find the back of the net.

With dominating performances in their last few games, the Leopards are still focused on tweaking a few things here and there, but are happy with how well the team has clicked.

“This season is a lot different than last season and I couldn’t be more happy about that and the team dynamic is a lot stronger,” Randall said. “We’re winning the games we’re supposed to. We have high hopes for this season, and we have the skills to go far, we just need to be able to execute them.”

The team will be back in action this weekend in the Lancer Invitational hosted by Cal Baptist.

The Leopards will then face Iona at 9 a.m. Saturday and George Washington at 1 p.m. Saturday.