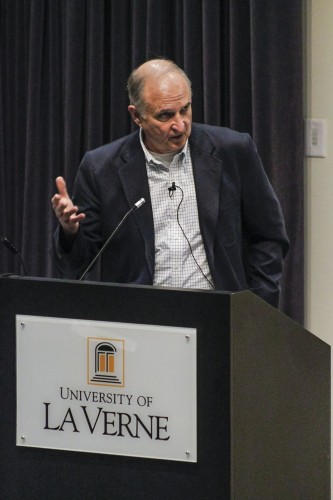 David Orr, author and environmental studies professor at Oberlin College, gives a lecture on his new book “Dangerous Years: Education in a Hotter Time” March 4 in LaFetra Lecture Hall. He discussed a call to action for various environmental issues such as global warming and climate change. Orr’s lecture was the first of the Robert and Mary Neher Lectureship in Global Sustainability series, which aims to bring awareness to environmental issues. / photo by Ashlyn Hulin

David Orr, special assistant to the president of Oberlin College, urged the University of La Verne to take action in reducing climate change in his lecture “Dangerous Years: Education in a Hotter Time” March 4 in LaFetra Lecture Hall.

“We have managed in the past 200 years and particularly in the past 20 years to change the atmospheric chemistry in ways detrimental to civilization,” Orr said.

Orr, previously a professor of environmental studies and politics at Oberlin College, is an environmentalist and author of several books on sustainability.

Orr first discussed the facts of climate change, including how we have negatively impacted the world and the atmosphere. This was the depressing part of his lecture, Orr said.

He gave an overview of what the future will look like if change does not happen.

“The carbon we release today, some large fraction of that will still be affecting the climate 10,000 years from now,” Orr said.

Orr is responsible for the Oberlin Project, a joint project by the city of Oberlin and Oberlin College to create a thriving sustainable and environmentally friendly community.

Orr also facilitated the design of the Adam Joseph Lewis Center for Environmental Studies at Oberlin College in 1996. It first opened in 2000. The building was later named one of the 30 milestone buildings in the 20th century.

“The building purifies all of its waste water, and it is the first college building in the U.S. to be powered entirely by sunlight,” Mark Goor, special assistant to the provost, said.

Orr continued his lecture by explaining how we can do our part to reduce climate change in the world and how we must take action.

We need to have a more civic civil dialogue, and sustainability should be a conversation that includes art, music, etc, thus having a wider dialogue of sustainability, Orr said.

According to President Devorah Lieberman, Professor of Biology Robert Neher and his wife and Mary Neher made a generous contribution so that the University can hold lectures and contribute to the education of global sustainability.

The Nehers’ will leave their legacy to us, Lieberman said in her speech. “What Bob did was, along with his personal passion, he and Mary have made their generous donation, and I mean it’s very generous, so that every year we will have an opportunity to continue to feel, to hear, and to live Bob and Mary’s values.”

Provost Jonathan Reed said he enjoyed the lecture for its call to action.

“I think the fact that it wasn’t just doom and gloom, but provided concrete steps for groups, communities, and universities to take action,” Reed said.

Reed said there will be more lectures in sustainability to come.

“This is the first annual Neher lecture, and we will have it every year moving forward to focus on global sustainability,” Reed said.