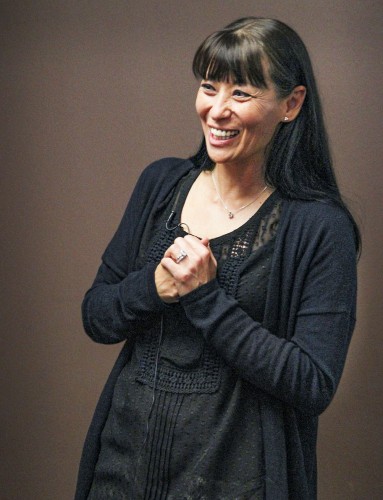 Denise Kennedy, assistant professor of education, talks about the effects of parent behavior on preschool children Tuesday in the President’s Dining Room. Kennedy and other faculty conducted research on the cultural difference among parents helping children with homework. They found that a higher number of Spanish-speaking parents were willing to help their children with their homework. Their research also showed that parents learned alongside their children. / photo by Ashlyn Hulin

Looney presented research done by her and assistant professors of education Denise Kennedy, Andy Steck and Veronica Escoffery-Runnels and associate professor of education Cindy Olivas over a few years.

“In general, parents that have higher levels of efficacy will set more challenging goals for their children and for themselves, as well, and they are able to persist as obstacles come,” Looney said.

Looney defined parental efficacy as the extent to which a parent believes he or she has the capacity to impact a child’s performance.

She said the research on efficacy has demonstrated that there is a relationship between having efficacious beliefs and parenting practices, which includes parental monitoring, involvement and helping their children succeed academically.

The study was specific to preschool children. Surveys were given to both parents and teachers.

The goal of the research was to learn a parent’s perception in their role of helping their child academically.

More than 400 parents participated in the survey, with the majority being Hispanic. Sixty percent of the surveys were in English and 40 percent were in Spanish, however there was no difference in the responses of both languages. Both indicated a high desire to learn and a high capacity to learn, Looney said.

Results indicated that there is a higher rate of Spanish-speaking parents helping their child succeed in school versus English speakers, according to Looney.

There was an aspirational quality seen in parents of children at the Head Start schools, Esscoffrey-Runnels said.

“We had other data that pulls teachers and teachers’ perceptions of what parents feel about their beliefs and attitudes, which will be another piece of research we can get into,” Olivas said.

Looney hopes they will have the ability to go to different areas with different schools, to study further on the cultural aspect on a parent’s involvement in their child’s education.

“I enjoyed the lecture, I like when they talked about how homework is an opportunity for parents to bond and learn with their child,” Kelly Sera, sophomore child development major, said.