By Donna Martinez, Vanessa Oceguera on March 4, 2016 in News 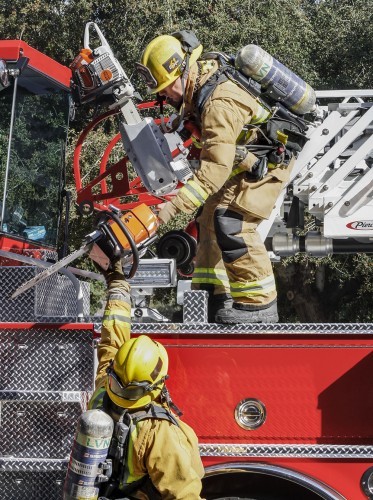 Firefighter Tim Marino takes chainsaws from fellow firefighter Victor Amezcua as they run through a training at the Campus Center Feb. 26. The La Verne Fire Department held training on campus throughout the week to prepare for potential emergencies in the Campus Center, Wilson Library and Vista La Verne. The fire department will hold more training sessions on campus throughout the year. / photo by Donna Martinez

The La Verne Fire Department coordinated a series of safety trainings Feb. 22, 23 and 26 to prepare the firefighters for emergencies in the relatively new “high-rise” buildings at the University.

Two of the tallest buildings in the city, the Campus Center, completed in 2009, and Vista La Verne, 2012, are technically high rises, as far as the Department is concerned.

The trainings, which took place in those buildings, the bookstore and Wilson Library, gave fire fighters practice in using a new tiller truck with a 100-foot ladder that reaches the top floors in these so-called high rises.

“The purpose… was for familiarization of the buildings, the hazards that go along with it,” said Battalion Chief Mike Thompson.

“It’s an opportunity for the firefighters to actually see the amount of time it takes to deploy all of the equipment.”

Previously the department was not equipped for such tall buildings.

During the trainings, the firefighters were given a potential emergency situation in each of the buildings.

With their 40 pounds of equipment, they had to figure out how to address and handle each situation.

The firefighters walked through the buildings, studied the layout – and gained information that would be crucial in an emergency.

“We are doing pre-planning… in case there was a fire or some kind of emergency,” Fire Capt. Kevin Greenway said.

“We’re looking through the systems, how we would normally attack an incident there. We don’t have any current high-rises in the city of La Verne, so we’re using that to kind of mimic a high-rise building.”

Alex Soto, director of risk management at the University, said he wants a safer campus for not only the students and faculty, but for the first responders as well.

“There’s no other way for me to look at this other than as a win-win situation,” Soto said.

This month 31 different departments within Los Angeles county are training so that all of the city fire departments are responding the same way to emergencies.

The department has scheduled more training exercises in the upcoming months, to prepare them for emergencies.