By Daniel Torres, Kat Simonelli on March 25, 2016 in Baseball, Sports 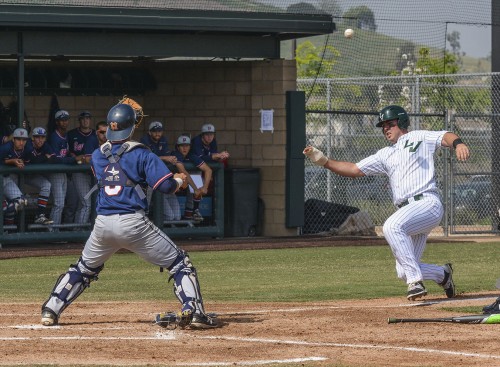 La Verne junior designated hitter Jakob Thomas barely loses the race to home plate in the bottom of the first inning in the first game of Saturday’s doubleheader against Pomona-Pitzer at Ben Hines Field. While the Leopards had no issue getting players on the bases throughout the game, the Sagehens’ defense held strong, allowing only two runs, resulting in a 3-2 Leopards loss. / photo by Daniel Torres

La Verne senior first baseman Ben White came through in the clutch with a game-tying home run against Pomona-Pitzer in the bottom of the ninth Saturday.

But that would be the high point of the day for the Leopards. The Sagehens came back to win 8-7 in 11 innings and cap off the doubleheader sweep at Ben Hines Field.

“The home run came at a very big time to tie the game up and send it in to extra innings,” White said. “It felt good to put us in a position to win that game. Unfortunately we couldn’t pull out the win, but hitting a home run is always exciting and it gives the team a lot of momentum.”

The Leopards took the first game of the series Friday, 6-3, at Alumni Field in Claremont. But fell 3-2 and 8-7, in the doubleheader Saturday.

The Leopards took advantage of a pair of errors in the ninth inning Friday and won, 6-3.

In the sixth inning of their last game Saturday, the Leopards rallied, bringing in four runs and cutting their deficit to within one run, 7-6.

Sophomore catcher Mark Abbate stepped up to the plate and singled to center field with the bases loaded, driving in freshman left fielder Chris Ligot.

A single through the left side by junior second baseman Andrew Douglas brought the game within two, as Edior scored and junior designated hitter Jakob Thomas hit a sacrifice fly to left field bringing Abbate home and putting the Leopards within one 7-6.

“All I wanted to do was get on base so we could score one and get our big guys up to get the big hits,” Douglas said.

White then hit a bomb into right field tying the game at seven to send the Leopards into extra innings.

The Sagehens took advantage of a triple and a single in the 11th inning to take the win after the Leopards could not answer back in the bottom of the inning.

The Leopards rallied earlier this weekend, after the Sagehens tied Friday’s game 3-3 in the bottom of the eighth.

Peres then scored on a throwing error by junior Pomona-Pitzer second baseman Tanner Nishioka and La Verne junior designated hitter Anthony Gonzalez singled through the left side bringing Thomas home for the Leopards last run of the game, 6-3.

La Verne went down early in the first game of the doubleheader Saturday after Pomona-Pitzer sophomore left fielder Bryce Rogan hit a two-run triple down the right field line in the top of the first.

White got the Leopards on the board soon-after driving Douglas in with a single through the left side, but a top of the sixth single by sophomore Pomona-Pitzer shortstop Matt Omori brought home another run, increasing the Sagehens lead to 3-1.

White answered back again with another RBI single driving Douglas home, but it was not enough to take the Sagehens’ lead.

Senior pitcher Brett Early was tagged with the loss.

“I threw a ton of strikes, which showed with eight strikeouts and no walks. Just two mistake pitches led to all the runs,” Early said. “I think this series really opened our eyes to how exposed we were and how much we can improve. I’m looking forward to playing Whittier this weekend where we have a chance to win three games.”

The Leopards will take on the Whittier Poets this weekend at 3 p.m. Friday at Ben Hines Field, followed by a doubleheader with the first game at 11 a.m. Saturday at Memorial Field in Whittier.