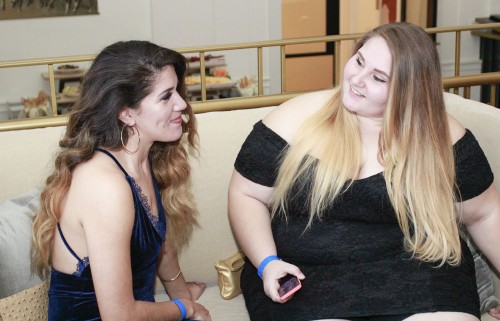 Senior creative writing major Brittney Britt and senior kinesiology major Miranda Ramirez enjoy drinks at the University of La Verne’s Winter Formal March 4 at the Santa Anita Racetrack’s Chandelier Room. The event was Kentucky Derby themed, with a replica motorcycle that students could pose by for pictures, as well as hors d’oeuvres and dancing. / photo by Kendra Craighead

University of La Verne students dressed up in suits and dresses for the 2016 Winter Formal celebrated at Santa Anita Park in Arcadia March 4.

Around 80 students attended the Kentucky Derby themed dance, named “Get Lucky in Kentucky.”

Marble tables and mirrors gave the park’s Chandelier room an elegant look. Chandeliers and a grand staircase led to the second floor, where a view of the racetrack awaited. Television screens showed black and white movie scenes, while a DJ played music for students to dance to.

An old-style motorcycle decorated the lobby, and a green screen set up in the corner of the room allowed attendees to have their picture taken and printed.

Guests chose from five different backgrounds and posed with their friends and party props.

“(I’m) making the most out of the night getting to know new people and enjoying the company of the people that I know and love already,” Britt said.

High heels and formal shoes did not keep women and men from dancing to a playlist of loud, pop music varying from The Weeknd and Sia, to Rihanna and Iggy Azalea.

“It’s set up so perfectly, I fell in love when I walked in,” freshman business major Alliyah Garcia said. “Dancing, honestly, is my favorite thing to do.”

The event, which has been happening yearly for about a decade, is an opportunity for students to dress up off-campus and enjoy time with their friends and colleagues in a different environment.

Upon arrival, students were offered complimentary valet parking. To those who live on campus, bus transportation departed from ULV at 7:15 to the Santa Anita Park.

Once inside the venue, the ticket was presented at the entrance and a blue plastic bracelet was given to those who were 21 and over.

Campus Activities Board adviser Angie Anderson said the main difference in this year’s event was the venue and considered the Santa Anita Park one of the most beautiful ones they have had.

Anderson said CAB tried to have the event on campus for the first time this year to facilitate attendance of more students, but due to alcohol being allowed the request was denied.

“It seems easier for students to just stay on campus,” she said. “We’d probably get a better turnout.”

The event ended around midnight, and each attendee was given a Winter Formal 2016 souvenir cup on their way out.